(A mix of travel notes and comments added later)

I’ve never flown through Kuala Lumpur before but, like a Vietnam flight, the trek across Australia seems endless. You cross the Tasman on a curving course from near Sydney up to the Northern Territory. It's a reminder how big New Zealand's nearest neighbour is! Once the northwest coastline slips off the progress map it actually feels like you are getting somewhere! 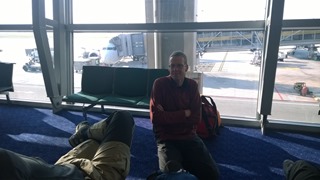 The Malaysian Airlines 777 was fine but the seat back screen showed it wasn’t the most recent addition to their fleet. You could see the pixels on the fairly small screen. There was plenty of content but nothing that really appealed enough to spend hours looking at that screen. However a near midnight departure combined with little sleep the night before—thanks to the ‘oh shit’ nearly missed the flight packing malarkey—meant I slept or just listened to podcasts/music off my phone for most of the flight.

Kuala Lumpur Airport is huge and our Kathmandu gate was at the far end of a terminal arm. It has all the usual luxury brand stores but seems this was the chocolate wing as most of the stores offered confectionery and every type of chocolate you could desire. Trouble was at 10:00am after an 11 hour flight I didn't feel like any! 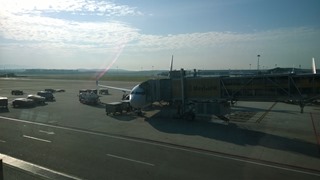 The Malaysian Airlines 737-800 on the Kathmandu leg was much newer. Comfy leather seats and high resolution large seatback screens. Our departure was delayed by a medical emergency just after we'd boarded. One way to discover that there are at least two nurses on the aircraft, one on our trip, as they jumped in to assist. I was surprised how long it took to get airport medical response considering we were still at the terminal gate. It appeared to be resolved ok, some sort of epileptic fit or similar, and after the poor passenger & his bag were offloaded we were away.

After that the flight was uneventful, the approach to Kathmandu interesting as you spiral down into the lush green valley. We got through the airport ok, although a bit of deft manoeuvring was needed to get through the crowds, barriers and doors with boxed bikes on the luggage trolley! 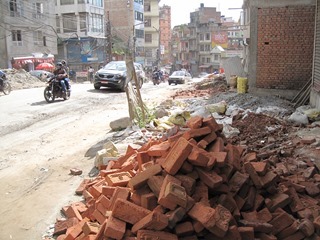 On the journey in from the airport Kathmandu reminded me of the less developed delta cities in Vietnam in feel, if not geography. Probably because it was my only other Asian reference before this trip. First impression was of a city attempting to develop but still pretty basic with an overwhelming hustle, bustle of people & chaotic traffic.

The other thing i found odd, but surely a Kiwi thing, was the very visible (and very polite) armed guards on the Radisson hotel door. Also noticed mirror checks of the vehicle undersides as they entered the hotel compound. The hotel itself was fine, if a but ‘international, could be anywhere’ until you looked outside the window.

it was a late'ish start after a good nights sleep for me. I went for a walk, about 5 hours, around Kathmandu. I didn't really have a plan to find the sights, there's a guided trip tomorrow, so just followed my nose wherever looked interesting.

Saw amazing mix of street life but some things stuck in the memory.

Got back to the hotel mid-afternoon to find a few more of the group had arrived with the rest due soon on the next flight. Turned out ‘soon’ was a bit longer thanks to a thunderstorm meaning half an hour circling and Sunday rush hour traffic adding another hour twenty minutes to the twenty minute trip from the airport! (this would be a factor later in the trip for me!)

After a welcoming drink and some Tibetan Visa related paperwork we walked to a nearby Nepalese restaurant for dinner. Tomorrow is a tour of Nepal and repack day. Complication might be the need to make our stuff (we take bikes on aircraft) porter friendly as they may have to walk it around the slip.

After a pleasant hotel breakfast we had the briefing that was supposed to happen last night. Much better for those who'd had a long day on the plane to get all the info after a good nights sleep.

The group was now complete: Bas, Kirsten & Eric, Helen, Ollie & Paula, Jan & I from NZ, joining Aussies (B, Robbie, Tim), Brits (Andy, Ian), Americans (Bob, Craig) and Nic(ola)—a Kiwi based in London—who had a fun trip via India thanks to an extended stopover in Delhi.

I hadn’t paid a single supplement so was sharing with Andy and Tim. It meant we’d get some shared, some single, nights which I hope gave them a break from my snoring…

In addition to Bas, who organised the group/trip from NZ, we have a Nepalese Guide: Sujan. He is bringing some crew from Nepal and we’ll join a Tibetan guide and drivers when we get there.

There are some logistic requirements around vehicles and drivers not crossing the Nepal/Tibet border, a 20kg limit on the flight and that we must take our bikes into Tibet. Means we’ll fly with a carry-on bag + bike with the bulk of our kit travelling overland to meet us in Lhasa. That sounds complicated but was made even more so by a massive landslide on the (only) road.

After the briefing we had a tour of a couple Kathmandu religious landmarks: Hindu & Buddhist.

Pashupatinath Temple dates back before 400 A.D, the current structure to the 17th Century and is still in constant use. The part I found most fascinating was the funeral pyres. Hindu cremation ceremonies on the river bank which place death at the forefront of daily life. Something western culture tends to avoid facing with our rather ‘cloaked’ approach.

Along with the historic buildings we got to se many aspects of Hindu worship. There's also constant stream of hawkers selling religious trinkets, hand work and small silver/teak cups, or singing bowls. I managed to avoid being tempted. Perhaps the most disturbing sight were a few severely crippled beggars at the temple gate. I wonder what their faith does for them?

The Boudhanath Stupa was rather more westernised. The Stupa itself is about a 40m dome surrounded by a walk with prayer wheels. It's surrounded by a very pleasant pedestrian plaza ringed with shops, cafés and art galleries of all kinds. Even if not seeking religious solitude you could enjoy being away from the constant bustle of daily Kathmandu street life.

I was surprised to see pigeons being feed but later learned they are seen as a sign of good fortune, rather than feathered pests! Made for some interesting photos when they took flight. I was also impressed with the intricate cast bell, fine scripture rendered in perfect detail. Although there were lots of shops aimed at tourists I didn’t do any shopping. That turned out to be the case for the rest of the trip, for some reason buying memorabilia didn’t seem important to me. Perhaps the experience (and gigabytes of photos to capture them!) was more important than physical reminders.

Most of us chose to be dropped off at the Thamel district for lunch, a great pizza place called Fire & Ice. I was craving something salty and a wood fired pizza with black olives & anchovies fulfilled that need.

Fire & Ice would feature later in the trip! It may seem odd to eat Italian in Nepal but we did have plenty of lovely local food. I enjoyed the cuisine, more akin to Indian than Asian, and ate more on this trip than ever do at home. Although the cycling, or just breathing at altitude, burned calories I made a good attempt to keep up with the burn!

Have just finished repacking, had to take some weight out of my bike box for the flight into Tibet. The bulk of our luggage leaves tonight going overland. There's still the not inconsiderable matter of a 2km landslide to traverse. A temporary alternative track was also washed away and the newspaper showed bags being walked across by porters!

At this stage we were three weeks away from cycling back down that road. It was anticipated that the landslide would be less of an obstacle by then, little did we know!

Today it's breakfast then on the flight to Tibet. Although Kathmandu has been interesting it felt like the prelude to the real thing. After about a year of anticipation it feels like the trip is really about to start.

We're carrying minimal hand luggage as have to fly our bicycles, seems odd our luggage can cross the border without us by road but an unaccompanied bicycle can't. There's a 20kg weight limit, my bike in its box is 19kg so the relatively small back pack intended for cycling is about to explode. It had to carry our medical supplies, electronics (have my old netbook) and a enough clothes to last until the overland truck arrives in a couple of days.

Kathmandu Airport was busy, in addition to the locals there was another cycle trip and Russian, Latvian hiking tours on our flight. Biggest hassle was manoeuvring the bike box through the terminal and security scans at the door, to check in.

Once through that, and the complications of travelling on a group Tibetan Visa (seemed to cause a fuss at every counter & screening point) it was nice to have some time in the departure lounge to get a drink (it was hot work). The China Air aircraft was a nice new Airbus A319, quite small I thought but the bikes must have fit. I was sitting next to a Guide from another trip who told me this flight, barely an hour, costs us$500-750 but there is no alternative. A fortune given the incomes of people in this region (Nepal

He also gave me some advice regarding Diamox. We were recommended to take it to help with altitude acclimatisation as our first ascent was 1200m, more than double the recommended 500m/day. There was no avoiding this as the 25km climb had nowhere to stop overnight so Diamox was a great help (in addition to several days in Lhasa before cycling proper began).

Some said they saw Mt Everest on the flight but others weren’t sure. I was on the wrong side of the plan (in a window seat though!) so didn’t try. i hope we’ll get a good enough view later in the trip!