I’ve been a TUMONZ (The Ultimate Map Of New Zealand) user for years but must admit I wondered what would become of it with the onslaught of web based maps & virtual earths. TUMONZ have a credible web presence with TUMONZ Live, 2D only, but is there still a role for a local install mapping package that isn’t free?

It’s been a while since last update, TUMONZ Version 2, but now there is TUMONZ Version 3. You could almost name it TUMONZ A.G.E.(After Google Earth). It not only acknowledges Google Earth exists but even embraces it allowing TUMONZ user data to be uploaded to Google’s on-line world.

Arriving on a DVD (CD’s still an option if you must) you get a huge volume of data as the standard map package has many features. In addition to the vector mapping & topographic data of previous versions you get new features including better map drawing (appearance & speed), incorporation of LINZ NZMS260 scanned maps, an improved 3D engine and interface. As before you can add additional detail with packs of photos, property data (owner, area & boundary coordinates) and point of interest map books. These are sold as modules allowing you to buy just the data you need or gathered into various “packages” targeted at specific uses.

The install is simplified thanks to the DVD format– No more disc swapping!

Once installed existing users will be in for a shock as TUMONZ 3 introduces a completely new interface. Compared to TUMONZ 2 it’s simplified which greatly helps new users but a little obscure. With TUMONZ you buy the initial install and data but application updates between major releases are free. I was disappointed to find several features from TUMONZ 2 missing but since then updates have restored some of those. The main pain was the elimination of the image export options which I hope will be added soon. You can install and run TUMONZ 3 without removing TUMONZ 2 and it’s something I’d recommend, especially if you are an existing power user. 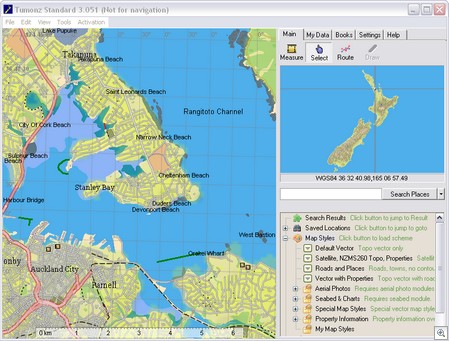 So is TUMONZ still relevant? For the casual user I’m not so sure but for serious mappers, or commercial users, datasets like the Property Data (title information for the whole country) which are not available on-line make it invaluable.

There’s more on the UI and new display options in the extended post or view the demo content at http://www.tumonz.co.nz