There’s lots of talk about virtual design/manufacture/prototyping but starting next month it gets an extreme test. Virgin Racing recently launched their first Formula 1 car, the VR-01, for the 2010 season. Its a computer designed/tested car without the usual wind tunnel model validation. In a sport where hundredths of seconds count it’s severe test for those CFD equations. 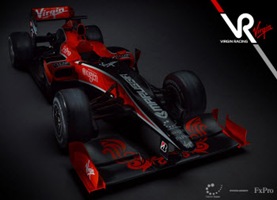 The cars on display at the Bruce McLaren Trust “Technical Evening” spanned decades, and generations, of Kiwi Motorsport design. This is a CAD blog and while it’s unlikely CAD/CAM was used for the 1968 Can-Am car, the Formula SAE car is the result of extensive CAD design & simulation. Besides, I thought this might be of interest to my CAD readers and there is the faint hope it will unearth some information or material to help the cause.

The McLaren Trust honours the memory and remarkable achievements of Bruce McLaren. He was born in Auckland, New Zealand in 1937 and died tragically whilst testing one of his cars at Goodwood circuit, England on June 1970. His story from the young school boy, with Perthes Disease strapped to a metal frame in a children’s home, to a world class international motor racing driver, engineer and designer is epic. McLaren cars competed & won in Formula 1, Le Mans, Indy and dominated Can-Am. His name is still used, by McLaren International, in Formula 1 motor racing today. Amazing to think that when Fernando Alonso & Lewis Hamilton step into their Formula 1 cars it’s the latest chapter of a history that can be traced back to a Kiwi schoolboy modifying his dads Austin Ulster to go racing.

The McLaren M8A Can-Am car currently being restored by the Trust was on display. It was built for Denny Hulme but also driven by Bruce McLaren and Dan Gurney. It was rescued from being scrapped, literally buried, and is the only one of it’s type remaining.

Ken Taylor-Reid and Peter Cave (Nuplex) talked about it’s body fabrication & fibreglass/composite technology. The body-work seen in the photos was recently completed and unveiled on the night. It has been fabricated from scratch using recovered components, drawings and photos as a guide. The front panels are currently in production.

Duncan Fox then detailed the painstaking research and component fabrication which is bringing this car back to life. The most recent piece of the puzzle located is an original engine block, one of only six, found in Japan. The trust hope to acquire it, at a cost of us$6,000, and re-unite the block and chassis.

It’s remarkable that the Trust has achieved, with much volunteer and supplier assistance, restoration to the tune of us$350,000 to this stage. It’s not finished yet and they will eagerly accept any financial or practical assistance to complete the car. It is owned by the Trust and will be used for demonstration and education, keeping the McLaren heritage alive.  If any readers have McLaren parts (from any cars) tucked away in the garage or can help in any other way let me know!

Malcolm Graham, representing the team, gave a great presentation about the remarkable University of Auckland Formula SAE Team Car. Built & funded by UoA Engineering Students it has the appearance of a Formula One car that’s been severely shortened, to about 2m long. It has a 600cc Supercharged bike engine & carbon fibre monocoque chassis developed using Pro Engineer. I thought a nice touch was the use of their sponsors “V” alloy energy drink can as a heat-shield!

It competes, using Bruce’s No 47, and recently set a record time in the Auckland Domain Hillclimb. It took prizes for first in efficiency (based on engine size), first in race class, and the outright win. Impressive considering the opposition included Ray William's 800hp 911 GT2 Porsche, the Bridgestone Porsche Champion, and a vast array of scratch built race cars, historic open wheelers and modified road cars.

I recently read about the US FSAE competition on the “In the Machine” blog. Perhaps we should get the Kiwi car over there to compete, maybe repeat the McLaren Can-Am domination…

This is cool, school students design a CO2 powered Formula One cars and race for a trip to the finals at the Australian Grand Prix, Melbourne, Australia. I’ve been to this GP twice and it’s a fantastic event. The circuit is a short tram ride from Melbourne's CBD and the GP literally takes over the city for the week. A great challenge, but what a reward! 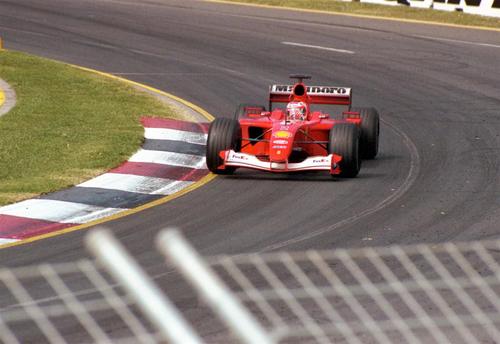 The Formula 1 (F1) in Schools initiative creates a fun and motivating environment for students to experience the engineering process. The worldwide popularity of F1 racing lends excitement while providing a relevant background for simulating critical elements of engineering in the real world.

The winning teams from each country are invited to compete in the World Championships to be held in Melbourne, Australia, at the Australian Grand Prix in March 2007.

Autodesk, Denford, and Pitsco have teamed with TSA to introduce students to industry-standard software and equipment that help them relate academic and technical subjects and put them into a real-life working environment, with the hope to help them make informed career choices. The teams work with 3-D CAD/CAM software and computational fluid dynamics (CFD) software as they strive to build the fastest F1 car of the future. They design everything from the car body to the wheels and axles, and they assemble the components after generating drawings of the race cars. The cars are raced on an 80-foot track and are powered by CO2 cartridges. The cars reach speeds of close to 50 mph.

Via In the Machine - Inventor Blog

I saw the new SuperMaxi racing yacht Maximus (silver hull) on the harbour for the first time on Sunday, while cycling. Unfortunately by the time I got a clear view from North Head for it was motoring.

Team EBS founders Charles Brown and Bill Buckley asked designer Greg Elliot to come up with the “fastest boat for its size”. Size was about the only criteria and at 30.5 metres (approx 100ft) overall length its huge! Comparison with the super-yacht and smaller boats around it gives some idea of the scale.

Built by Cookson Boat Builders Maximus pushes the limits of SuperMaxi design with a carbon hull, canting (swing) keel and rotating wing mast. The links below show some of the design and technology behind this impressive project.

Next time, I’ll catch it in action! 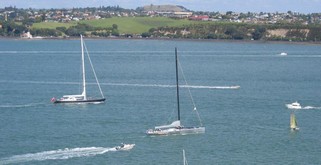 Video (Broadband and Dialup) featuring interviews with EBS bosses Charles Brown and Bill Buckley as well as members of the design team, boat builder and more.