A recent comment on an old MindManager post alerted me to this MindManager/Solidworks integration. PROJECTSCHEMA uses MindManager to visualize and interact with Solidworks Assemblies in a graphic format. It reminds me of the MindManager For AEC DWF part Michael Scherotter experimented with back in, oh my was that really, 2004!

I’m not a SolidWorks user but as a MindManager fan think this sort of integration with design project information has real potential. 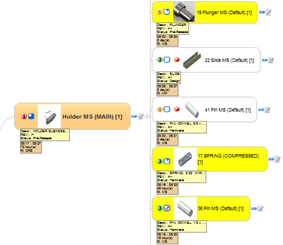 PROJECTSCHEMA allows an entire SolidWorks assembly to be opened as a MindMap. It imports thumbnails, custom properties, eDrawings and attachments. It's meant to allow anyone to quickly gain insight into (and brainstorm) the project without needing to open SolidWorks.

Once the mindmap is generated, you can interrogate the entire project by filtering and changing the views. You can even use the Gantt Chart view to plan and track your progress. 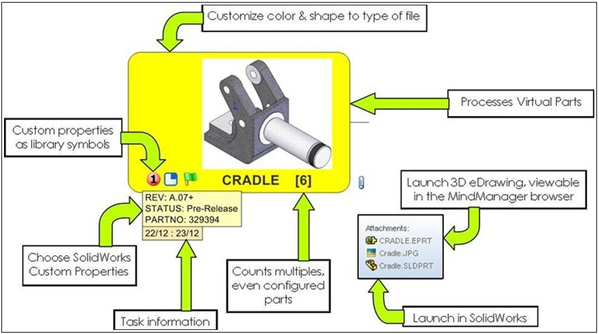 Traffic Light Thought posts started as a way to capture random, ok rubbish, thoughts which occur waiting for the red lights to change on my commute. They usually appear on the other blog but tonight’s one has a CAD flavour.

The car in front had a personalised plate:

My CAD Geek brain immediately thought “A Solidworks user?”. The fine print on the plate surround dispelled that as it was some company touting a therapy which “puts you in touch with your soul”.

I’m happy to give you an email address to watch your:

“series of screencasts to give you the information you need to decide if SolidWorks® is the right solution for you.” 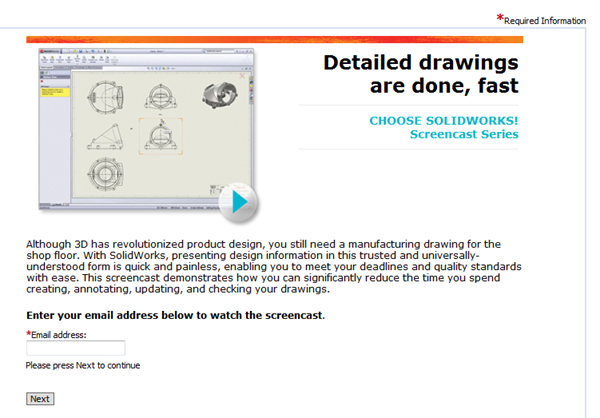 But the next form requires too much info when it’s just to view your advertisement: 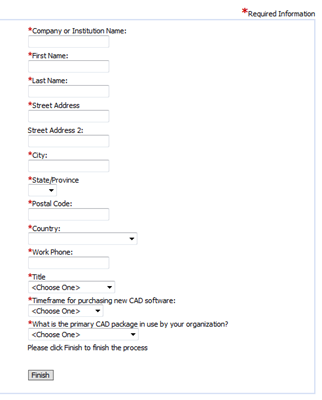 Build your own Solidworks Lamborghini

I followed a Ferrari 430 along the motorway tonight and got home to find this SolidSmack post about another Italian exotic. The YouTube below shows a Lamborghini being modelled in Solidworks and is the summary of Dan Lavoie’s tutorial enabling you to build your own. It’s impressive but, given the choice, I’d rather have a Ferrari!

SolidWorks to AutoCAD Architecture, via the blogosphere

In my "year review" post I mentioned reading SolidWorks blogs. Although I don't use it understanding the "other side" is handy when you're trying to share data. It paid off recently when I needed to create models for our store plans for fittings from a supplier who uses SolidWorks. I know little about SolidWorks and it seemed they knew little about sharing with other systems. A post on SolidSmack was a great help in suggesting the best method for conversion:

SolidWorks Tutorial to Protect 3D Model Data | SolidSmack.com
Save as Part: You may know you can save an assembly as a part file (AWESOME), but what you can also do is select what you want to show in the part (SUPER AWESOME). You have the option to show only Exterior Face, Exterior Components, or All Component.

The supplier sent an ACIS(.sat) file but also a SolidWorks Part (.sldprt) using the "Exterior Components" option. It removed a lot of hidden detail I didn't need but retained the object part structure. This made deleting removing unseen components and detail like nuts, bolts and other components much simpler than dealing with thousands of faces the Exterior Face option generates.

Into AutoCAD, direct or via Inventor LT:

The .sat file imported into AutoCAD fine and could have been used without further processing. However, I also tried importing the SolidWorks Part file into Inventor LT. One advantage of Parts you have much smaller files to email (approx 50% .sat). You also get discrete components but no feature detail so you can't delete holes etc (which is what I was hoping). One advantage of this intermediate step was I could do further clean-up and export my own .sat  files without annoying the supplier.

It was also a chance to learn a little more about Inventor LT! Having done the tutorials I had some idea how to attack it but there is nothing like mucking around with your own model. Like most applications many concepts are common but the little changes, like differences in WCS orientation & Zoom/Pan, that catch you out. I found the appropriate options to match AutoCAD which made life easier. 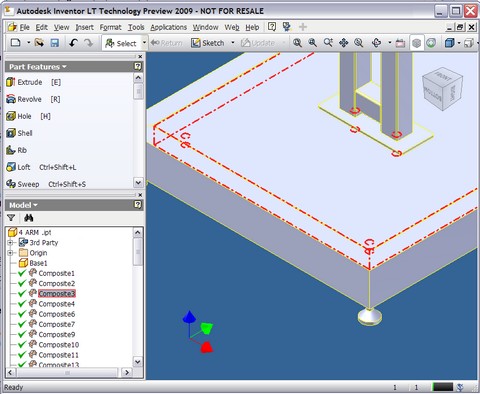 And finally the AEC Object model:

For our purposes you still need to further reduce detail but having a model to base things on saves a lot of effort. Below you see the original 1.9mb of SolidWorks data dumbed down to less than 200kb of AEC Mass objects. Using the original SolidWorks geometry as a guide, or basis for AEC conversion, makes creating an accurate lightweight model much easier (shaded transparency below). However, it's a pity there isn't a better way to remove unnecessary detail like hollow steel sections and threads without remodelling. 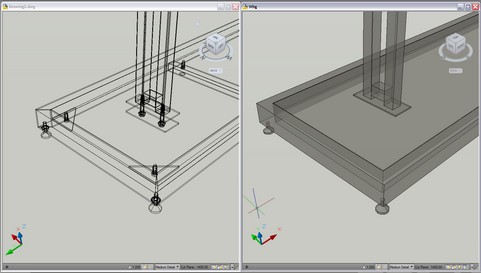 I wrote this draft several weeks ago, currently many of my SolidWorks blogger mates are at SolidWorks World in Orlando (it's like Autodesk University for SolidWorks). I'm sure they'll chime in if they escape from Disneyworld.

Revit advice from a SolidWorks Blog?

Gabi Jack's Blog: I still don't get it!
So, for all of you that, like me, were AutoCAD users before and are now trying to learn SolidWorks, one small piece of advice that can make your life easier...

Do not try to find AutoCAD in SolidWorks. Just forget what you know, check your AutoCAD skills at the front door, and throw yourself into SolidWorks just as it is meant to be. Don’t even dare try to turn it into what it’s not. Trust me; you’ll advance faster that way and you’ll be amazed at what you can accomplish in so very little time!

Given the focus of the latest AutoCAD release, a new UI, I found this recent blog post interesting reading:

Matt Writes - dezignstuff.com/blog/:
“The 2008 interface is only the latest salvo in this war on their customers. The 2008 interface throws away all of the knowledge and training that loyal customers have accumulated over the years, mainly for the benefit of people who have never used the software - potential new sales to reluctant-to-change 2D users. Is this any way to treat your loyal customers? Yank the rug out from underneath them? What’s wrong with a familiar interface for a tool? We are not talking women’s fashion, we are not talking styling, we are talking about how we interact with an engineering tool that needs to remain familiar. There is no benefit in random change.” [continues]

The UI in question? SolidWorks 2008 (released July 2007) with it’s version of the ribbon. Matt's “reluctant-to-change 2D users” being targeted by the new UI? AutoCAD users who have just been ribboned! 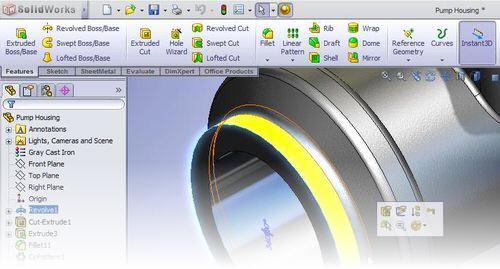 SolidSmack and the Flying Spaghetti Monster 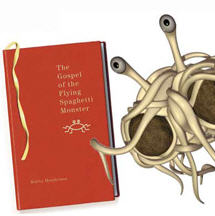 Although I don’t use SolidWorks I do read SolidSmack – a SolidWorks focused blog. The “how to" posts aren’t much use to me but there is a wealth of other content on product design, technology and other cool stuff that keeps me reading.

I suspect Josh has been touched by the Flying Spaghetti Monster's noodly appendages. His “5 minute model” combined with his site logo (below) resembles a cubist FSM.

SolidSmack.com - www.solidsmack.com
I created the below model in just over 5 minutes. Fun stuff. 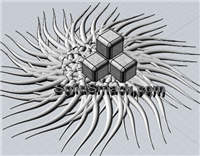 It’s already appeared in AutoCAD, DWF/Freewheel (thanks to Robert Grandmaison), MindManager and Second Life. Will the Flying Spaghetti Monster spontaneously appear in Revit, ArchiCAD, Inventor and other design applications? Is it a sign?