Techsmith have posted a useful guide on using Snagit 11 with Windows 8. Although it is a desktop app (no RT version yet) you can capture the Start Screen and Modern UI applications with the use of hotkeys. There’s also a guide to adding Snagit to the Start Screen & Taskbar for quick access. 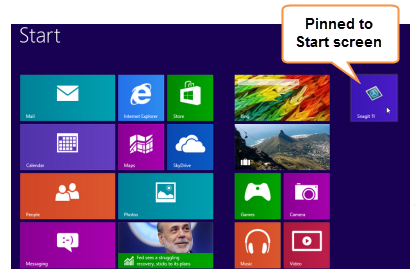 I broke my Snagit, then I fixed it - Snagit Editor C++ runtime error 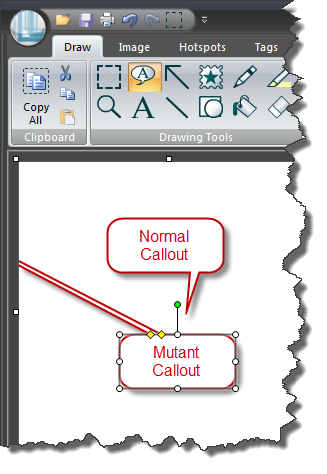 I can’t imagine working without Snagit but faced that horror last night.

How I broke it

I had CAD application publishing (digital print to DWF file) and was editing some captures while it was working. The computer was occasionally a bit slow as the publishing consumed chunks of processor time.

While adding a callout I clicked, maybe outside the editor, during a pause. It appeared the callout “tail” flew off to infinity (recreated right). Then Snagit Editor got very slow and appeared not to respond. After a lengthy wait I had to End Task my way out.

Snagit capture was still running so I tried another screenshot. As the Editor launched I got a C++ Runtime error (below) and launching it directly gave the same result.

By now the CAD publish was over so I restarted the whole machine. I hoped it was just some corrupt memory, temp file or whatever but no joy, the runtime error persisted.

A repair install, and another reboot, didn’t help so this was getting serious. Life without Snagit is a scary thought. 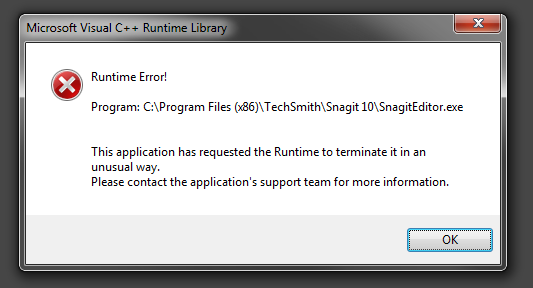 How I fixed it

I had a look at the TechSmith Support site but the only mention of this sort of error related to some old XP/Vista runtime library updates. Since I use Windows 7 64 I didn’t even try those fixes. A general web search didn’t point to any obvious solution so decided to backup my unsaved captures, remove and reinstall Snagit.

Unfortunately I discovered the backup function is done from the Editor, not the Snagit capture component, which presented a problem. However it was then I noticed behind the error dialog the Editor was still running. It didn’t actually terminate until you clicked “OK” on the error dialog. 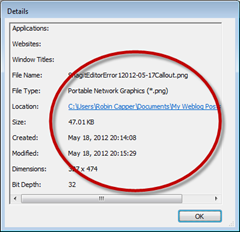 I was able to launch the Editor, run the backup routine and save the file before OK’ing. When I launched the Editor there was still an error but restoring my unsaved captures seemed to work.

I suspected that mutant snag was the cause. Other actions seemed to work normally so attempted a fix before the full uninstall/reinstall.

Find it, kill it, problem solved

If I could get rid of that suspect capture things might work but where to look?

Right Click > Properties on this snag showed none of the normal details (right), just blank fields. Trying to open or delete it took forever and the Editor crashed before it completed the operation. 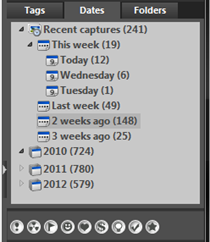 The backup is a single file so couldn’t see how to isolate and remove one capture. I guessed unsaved snags were stored somewhere in the user profile but where, what would it be called as hasn’t been saved yet?

Then I noticed the Right Click > Open With option (1,2 below) and that was the answer. I deliberately chose Paint knowing it wouldn’t know what to do with a .SNAG file. The resulting dialog (3) gave me the path and name of this troubled Snag. With the Editor closed I deleted the suspect file (4) in Explorer.

Snagit Editor then started up as normal and has done without error ever since. Best of all, my library (literally hundreds of SNAGS) survived all this! 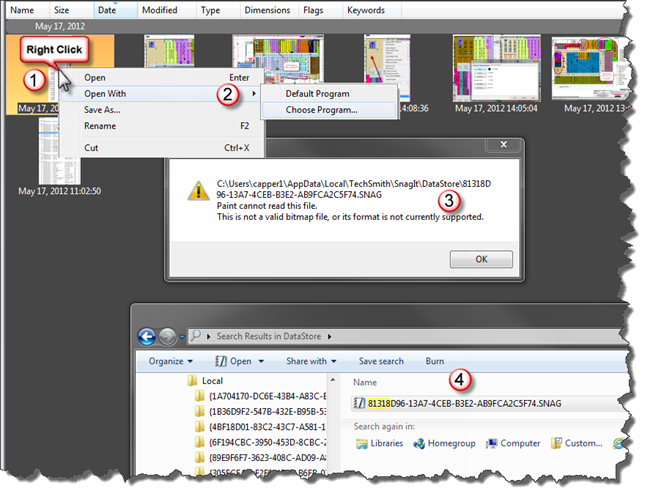 Snagit accessories are a great productivity booster. Take a screenshot and push it to applications (including Word, Excel, PowerPoint, MindManager), Web services (like Flickr) or Blog platforms in a click.

However I hit a snag while setting up a new machine. The accessories are downloaded as a package and installed from your local drive by double clicking. However this didn’t work for me as the browser had renamed the file extension from .snagacc to plain old .zip.

The solution was easy to find on the Techsmith forum:

I get a zip file but I click on it and open it - but it does not install.

However in New Zealand it doesn’t quite work as it will already be 8.17, or in our notation 17.8, and happening at 5 a.m! I’m not sure if that means we find out later, earlier or at precisely the same time?

As Douglas Adams said: “Time is an illusion. Lunchtime doubly so.”. For this I’d add “5am is a mythical time that surely doesn’t actually exist”.

Check out, the announcement & AutoCAD Design 8.16 Page on www.facebook.com/AutoCAD and follow the #design816 tag on Twitter, and video below for all the buzz.

* I have no idea what “BIG” & “AutoCAD” will be announced but my Twitter speculation that the true meaning of LT, as in AutoCAD LT, will be revealed or it’s a radical new Menu/Toolbar User Interface have yet to be refuted… 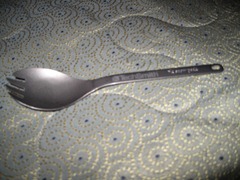 It was great to meet the lovely Betsy Weber from Techsmith, think Snagit and Camtasia Studio, and I was delighted when she presented me with a legendary Techsmith Titanium Spork*. 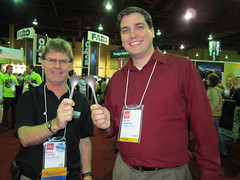 Solving the Snagit blackout and non-ActiveWords?

Something changed on my machine recently and impacted two of my favourite utilities.

Screen capture blues from the black, and non-ActiveWords

I went to take a screenshot and the capture looked like a photo taken in a coal mine with the lights out. You could see all the Snagit capture UI working perfectly (something like the faked image right) but the screen and resulting capture were solid black.

A quick trip to Techsmith support was in order but my ActiveWord “snagn”, which should launch the Snagit website, didn’t work. If the browser wasn’t running it launched and opened the site as expected but entering the ActiveWord in an existing browser had no effect. Then I found other ActiveWords didn’t work in the browser either. Strange?

I found this post regarding black/white/incomplete captures at Techsmith and it mentioned some security software blocking screen captures, including ZoneAlarm (which I use).

It recommended adding Snagit to the safe list which is found under Program Control>Programs in ZoneAlarm. However when I checked both Snagit and Snagit Editor were already listed and trusted to interact with other applications.

A trip to the ZoneAlarm forum revealed another clue from “ab-onguard”;

I am able to use SnagIt 9.1.3 by changing my Zonealarm Extreme Security suite 9.1.008's Forcefield's browser security settings/Advanced/Uncheck "block programs that secretly record your keystrokes". Without doing the above, SnagIt would not capture any "profile" settings. I have not had any SnagIt issues since !

I configured ZoneAlarm as suggested by disabling the “Anti-keylogger” section in the Browser Security (below). That restored ActiveWords functionality, which I guess does look like a key logger to AV software, but didn’t help Snagit even after a reboot. 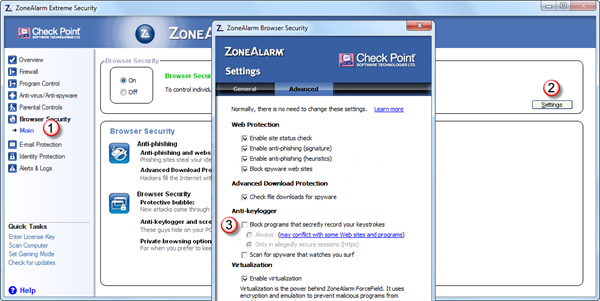 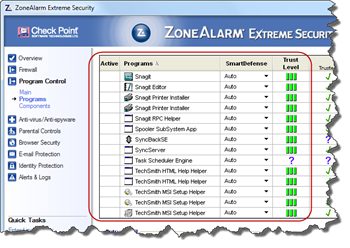 I did a repair install of Snagit then restarted the machine and (as you can see from the screenshots in this post) all was good.

This also added a slew of other Techsmith related components to the ZoneAlarm trust settings and I wonder if that was a factor?

I can only presume some sort of ZoneAlarm update upset things but it was good to get these two applications back to normal!

When I see something which triggers the “could be a blog post” thought I grab a screenshot with Snagit. and save the image. Sometimes I use the Send > TypePad output to post direct from the Snagit Editor. Usually I tick “Post as Draft” as it could be days, weeks, months before the actual post appears but means the idea is captured in a few seconds.

Snagit ships with a selection of Outputs installed and others, including most blog/message platforms, available (free!) from the Download Accessories page or Tools > Accessories in Snagit.

If you upgrade from an earlier version of Snagit accessories will be migrated but you should visit the Tools > Accessories > Accessories Manager to see if updated versions are available. Often this requires user intervention as account based services, like Flickr and TypePad, require you to authorise the initial access. Once done it becomes click & post with Snagit managing the rest.

As seen below the TypePad Output plug-in has basic text edit and layout options so it’s possible to create a simple post with image direct from Snagit. The only thing I’d like to see is support for Categories/Tags to eliminate the need to add these in TypePad. Snag, click, type, post, done! 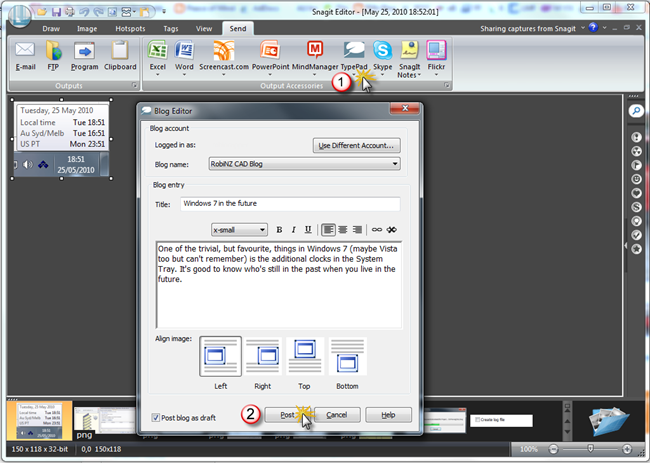 Snagit tames the Revit Browser (and other long windows)

The Revit Project Browser is great for bundling all the assets of a Revit Project into a single list. Unfortunately it’s “one view scroll, scroll scroll” interface can be tedious to document. If you want to use in a project standard or just share with collaborators (without sending the whole project) it can take several “page” snapshots to capture.

Snagit automatically scrolls the entire length of the control and, now it gets clever, if required scrolls across & repeats the process to capture the full window width. The resulting “strip snags” are compiled into a single image and presented in the Snagit Editor. The Camtasia capture below shows the process, the resulting 220 x 1088 pixel snag is on the right. 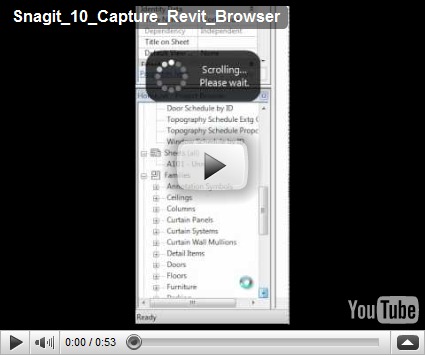 Snagit 10 was released this week with a bunch of new functionality that I’ll look at over a series of posts. The first alone justifies upgrading and you’ll use it for every snag. A new “All-in-One” capture profile merges screen, window, object, scroll and marquee select captures in a single fluent capture mode.

Hit Print Screen, then glide around as Snagit automatically switches capture modes. For precision selection a cursor magnifier shows pixel level detail and a yellow border/highlight shows the selection extents. When the desired selection is highlighted just click to capture. 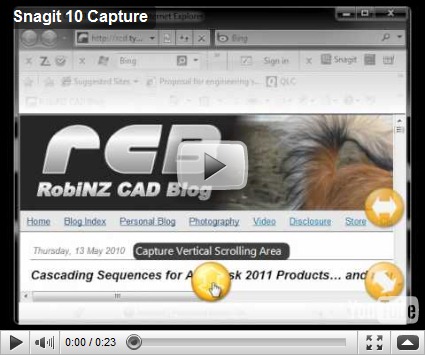 Disclosure: I was involved in the Snagit 10 Beta, thanks to Super Evangelist Betsy Weber for the evaluation upgrade for my Snagit 9 licence. 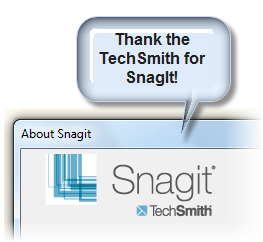 I was doing some screen captures today on a test machine without Snagit. It’s a miserable experience when something that’s usually so seamless and easy, with Snagit installed, becomes hard.

A Snip + Paint does not match a Snag!