Robert Scoble may be known to you as the PodTech, ex-Microsoft, Geek Blogger & Videoblogger but this show ventures into the world of Architecture, Construction, Green materials and Building Information Modelling with Toby Long of “CleverHomes”.

It’s a discussion about the concept of BIM for design, manufacture and estimation but the only design software seen in action, briefly, is SketchUp during an office walk-about. While most the info will not be new to CAD/BIM savvy readers of this blog it’s great that this sort of info is reaching other industries and communities. It will be interesting to see what Robert’s usual, I’m guessing this, mainly IT/Tech based audience think of BIM.

Some of the comments on integration of BIM and Estimation link into a presentation I attended earlier this week. More about that in a future post.

Building a new kind of house with CleverHomes | ScobleShow: Videoblog about geeks, technology, and developers
This is a bit different today. It's not about Web 2.0, or startups, or computer science. Instead we take a look inside the industry of home building with CleverHomes Founder Toby Long. Toby is an architect, but one that is trying to find new, more sustainable ways to build homes. If you thought you knew how homes should be built you might want to listen in here.

UPDATE 17–02–2007: I was curious what BIM applications CleverHomes use so emailed them. The response was: “Vectorworks 12.5 is our only BIM (building information management) software”

Google Earth Blog: Down Under and Kiwis Get Roads in Google Maps 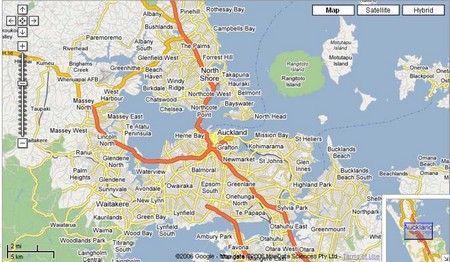 Google SketchUp, free for personal use!

Wow, Google have released a free version of SketchUp (for personal use) + 3D Warehouse, a web repository for 3D models. Read Randall's great post for all the details on this exciting move to make 3D CAD for everyone.

Wow, read all about it at Google Acquisition FAQ's but a few key points;

How will @Last and Google work together?
Work together? We are together – @Last Software is now Google.

What does this mean for SketchUp the product?
Although we don’t know exactly what new capabilities we’ll be able to build into SketchUp, it’s probably safe to say that the additional resources we get from Google will give us the ability to do more cool stuff than ever before.

AECbytes at the SketchUp User Conference

AECnews.com is blogging the SketchUp 3D Base Camp

I was surprised to get a trackback from Randall S. Newton to my post regarding Google Earth + SketchUp!

For the past few days I’ve been reading his blog posts from the SketchUp Users Conference, 3D Base Camp 2005. Read them at AECnews.com indexed in the Event Blogging category. 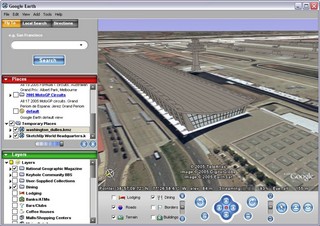 Back in August after playing with Google Earth I wrote;

“BIM + Global Database + Bandwidth = The Future, Today. A BIM project that extended to a site, or maybe suburban layout, can now be placed in context. Anyone with a broadband net connection can have the world on their desktop today. Your project is part of that world.”

I recently found out that SketchUp made it happen producing a Google Earth Importer/Exporter that enables your SketchUp model to be placed on Google Earth. The screen-shot shows their sample model of Dulles International Airport in the Google Earth viewer (click for a larger view). The banner at their site shows an animated zoom from Google Earth Globe view to their HQ at street level.

What was an idea a few months ago, becomes an impressive reality. A cool 3d building modeller meets a cool 3d world.

You already know the power and ease of use that SketchUp provides... now there's a new way to view it and share it with your friends, co-workers, clients and your favourite stranger!

Via Geocreek: Visual and Spatial Data

Its tough getting a new type of software established. When I first saw Autodesk Architectural Studio (AAS) on the Autodesk US web site several years ago it looked like potentially revolutionary software. The idea of migrating traditional tools to a digital workplace specifically for those who don't need, can’t or won’t use more complex “full on” CAD applications was a good one. The idea of combining “hard” CAD data, “freehand scribble” and mass modelling in a digital workspace was great. To have a CAD aware application to pull together many resources for presentations was appealing. At the time with Tablet PC's about to hit the market the literal electronic drawing board seemed viable. To take a tablet into meetings for the inevitable "scribble on the plans" that always happens, capture those scribbles, and push them back to the CAD applications was promising.

I never got the chance to try AAS in production and now according to this post on the AAS newsgroup from Jim Flanigan (AAS Development Team) its about to die. I would love to have tried it and maybe even purchased it but it was never offered in our market. I still think AAS addresses an important part of many architectural projects that is not handled well by any other Autodesk BSD product - the conceptual stage of a project that is still largely done by scribbling on paper.

From what I’ve read the eary vision for AAS was remote teams collaborating over the web using AAS and server-based documents. Data transfer rates and a reluctance to rely on Internet connections, which at the time were far from reliable, limited the appeal of a web-based applications. Its ironic that now reliable connections with the capacity for this are common and could work. Later versions of AAS, from what I’ve seen mostly on web demos, emerged to be a useful conceptual tool capable of handling, CAD plans (via DWF), images and 3d mass modelling. This was done with a simple toolset and application interface. AAS broke the mould for Autodesk CAD by taking familiar the pen, pencil, eraser, template, and tracing paper tools used on the traditional drawing board and presenting them in a digital workspace.

I still think this is the most natural way to design. A tablet with pen interface combining the ability to sketch and edit easily with a mix of scans, 2d CAD and 3d massing and modelling tools was where it showed a huge gain over the traditional paper based approach and was its point of difference from other architectural CAD tools. The “tools on tablet” interface seen in AAS, now in Architectural Desktop (ADT), combined with context sensitive menus and “properties bar” is the cleanest way I’ve seen to enable tools, object properties and options to be presented and customised. It seems that the legacy of AAS will be the tool palette system now seen in the AutoCAD, ADT and other Desktop products.

There are other similar products but none offer what I think is needed in a conceptual spatial design tool. SketchUp is closest but its focus is making CAD modelling easier. It does this extremely well but while the modelling tools and output are great I think its user interface still needs a lot of work. For me it hampers conceptual thinking as its still a traditional windows toolbar/button command based interface. There is nowhere near the fluidity of pen on paper although the ability to push/pull and twist geometry to create complex massing is powerful. However, even with the best tools and interface the CAD model is only one aspect of the conceptual design process/meeting.

I hope there is an even better product waiting to be launched. I need a combination of MindManager Tablet, Autodesk Architectural Studio/DWF Composer (or SketchUp) all combined in the same application “space”. This could be the ultimate conceptual design, collaboration & meeting tool. Running on a tablet it could capture & organise brainstorming ideas, freehand sketches, pull in documents, spreadsheets & other files from the network or web, link to audio, maybe video and combine this with the 2d & 3d CAD work that is usually the focus of the design meeting. Afterwards you could review and forward the appropriate parts of this “package” to others in the form they require it to continue working.

Will it happen? I don’t know but I hope it will, soon. Its what I was hoping Autodesk Architectural Studio 4 would be...