This is Building Information Modelling

Nearly a decade ago I saw Scott Arvin's doctorate thesis prototype software (below) which experimented with logic control of space & adjacency to create dynamic bubble diagrams. He used a mechanical metaphor to describe relationships with “strengths” expressed as springs. You could automatically or manually rearrange spaces based on the rules to generate multiple plans. As retail space plans are simply the resolution of conflicting requirements, preferred adjacencies and physical constraints it caught my interest.

Recently, browsing in my file archives, I stumbled on it again and a quick trip to LinkedIn sorted out the “what ever happened to…” question. Scott introduced me to Mark Syp’s recent work creating a similar, but three dimensional, tool in Grasshopper3D. Check out the video below to see how a logical adjacency plan could develop into a conceptual model. Imagine the parametric conceptual modelling engine in Revit with this sort of relationship resolution. I’d buy it.

Thirteen years, where did they go?

According to Outlook, today marked thirteen years since I joined The Warehouse Limited. Coincidentally, yesterday a question regarding the area of a long closed store had me ferreting through an old plan* (below left) which represented TWL store design at about that time.

Since then we have evolved from 2D CAD to BIM with tools that seemed like science fiction not much more than a decade ago. Although technology, and the world, has changed the reasons I decided TWL would be a good place to work remain. So, it’s back to work tomorrow! 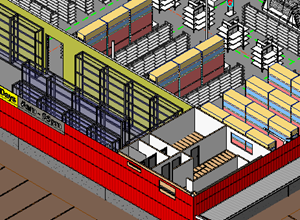 * This plan was a trace of a hand drawn building so old it was dimensioned in feet & inches!

I haven't found many retail fit-out/design specific blogs in my net travels. Perhaps it's a niche but given the number of shops, and potential other uses for shop fittings, I think there is an audience.That's why I was pleased to find Tony's retail fixture blog today. If you're interested in retail or storage solutions have a browse, I've subscribed.

Fixtures Close Up – A Pictorial Blog 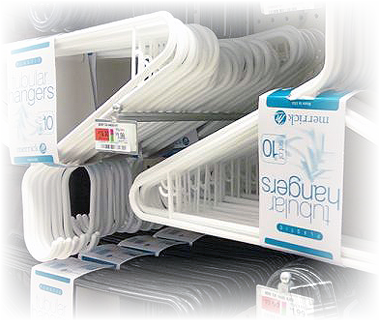 This blog is a pictorial inventory of unique or otherwise interesting small-scale fixtures seen across the entire range of retailing.  Just as a city-scape is built up of individual bricks, beams and boards, so a store is constructed of many small-scale fixtures that combine to help create the selling-floor environment.

Many of these small elements are unsung heros in creating an effective, functional, appealing merchandising space for goods. Because of the wide-ranging creativity of designers, similar display problems are often solved in unique ways.  This site attempts to document these varying solutions … and provide a source of ideas and inspiration for additional new solutions.

The site is maintained by the Tony Kadysewski, Marketing Communications Manager of Trion Industries, Inc., but is meant to be totally independent, informational, and non-promotional. It is resource for Trion staff as well as others interested in retail and point-of-purchase fixtures.

That is Architecture, what is Retail + BIM?

If you take Building Information Model principles from Site down to Shelf/Product level the "Building" part seems limiting. I've used the term Retail Building Information Model in the past but wonder how appropriate it really is. BIM technology is the core physical data model but the extended data goes far beyond a building. I have been trying  think of a better term, but not sure I have:

So far Digital Store Model seems the best fit to me. Virtual also works but I find people then leap from immediately from "Virtual" to "3D" (as in games, Web, Second Life etc). While a Digital Store Model includes a 3D model it's not just about 3D. I also have to go through our existing TLA's*, there are lots, to see if it already means something else within the business.

The video below, which I first saw tonight, is the best explanation of Architecture (in the general sense) that I've seen. Mind you I'm not an Architect! It's nicely executed and eerily similar to the concept for a Digital Store Model presentation that I sketched out today. Now I have the challenge of turning that random scribble into something worth sharing. Guess who is attempting to describe "What is a Digital Store Model?" to a totally new audience...

Architecture from MAYAnMAYA on Vimeo I saw via a post on blog.miragestudio7.com.

What I found most compelling about this Microsoft Labs vision of the, near?, future is the variety of display technology and form factors seen. You can see why Microsoft have invested so heavily in technologies like Surface, touch interface and  "the cloud" that will share data across these devices.

The retail video below isn't new, it has a PC running XP Tablet, and shows some concepts I first saw at a Retail FOCUS conference in 2006. Linking virtual and physical shopping is a challenge for all retailers and it will take Retail BIM, literally, to the customer. To identify product shelf locations, have stock there when the customer arrives and coordinate that information with an e-commerce portal demands perfectly synchronised BIM, Logistic and Merchandise data in a dynamic environment. It's a specialist market and one Autodesk BIM tools have not yet really addressed... 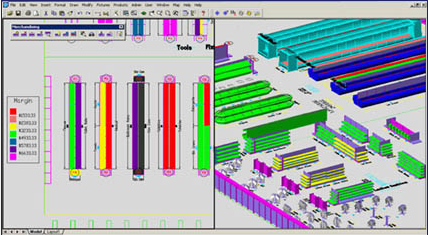 cnet news, via All Points Blog, report Oracle have recognised the value in providing a total design solution for retail with the acquisition of Advanced Visual Technology Ltd (AVT).

I first saw both Retail FOCUS and Revit about 7 years ago when, independently, AVT and (pre-Autodesk) Revit visited New Zealand. I could see the potential and (then) limitations in both products. Retail FOCUS's main weakness were OEM AutoCAD limitations (CAD objects/display) and Revit's were it's incomplete BIM (no services then), work flow challenges and closed nature preventing integration. I have followed both products evolution in the hope they might connect.

A combined AEC BIM + Retail Focus + POG "Database" could be the ultimate retail design/management tool. What I've termed "Retail BIM" could be used to design and manage every retail business asset from the site, building, down to shelf product allocation. With the addition of geo/location and demographic/sales data you'd have a powerful combination of database solutions for retail forecasting, design, management and analysis.

I hope this acquisition doesn't mean Autodesk have missed the boat. Could an Oracle Revit based Retail BIM still happen? 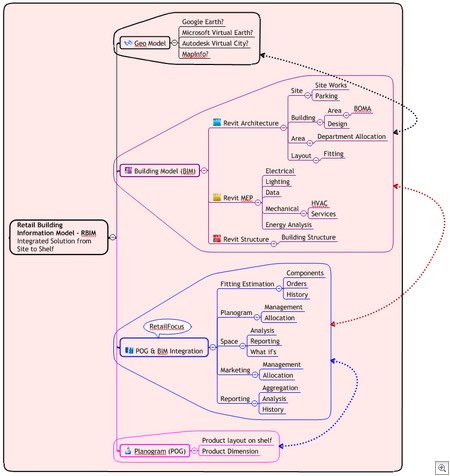 Oracle today announced that it has entered into an agreement to acquire Advanced Visual Technology Ltd. (AVT), a leading provider of 3D visual macro space planning software for retailers. AVT enables retailers to collaborate with their stores and supplier partners to design and plan retail floor space in real time with a current photo-realistic view of each store. AVT products combined with Oracle Retail’s comprehensive application suite is expected to increase the profitability of a store’s selling space through enhanced space allocation and performance monitoring across categories, aisles, departments and the entire store... [cont]

Note: TWL does not use AutoCAD (vanilla), Revit, Retail FOCUS or Oracle Retail Products for Retail Layout. The MindManager map above is my personal speculation, wish list, for the possible combination of BIM/POG technology for Retail Design Management.

I know what it means, to miss New Orleans, nearly...

It was ironic that I chose the Qantas/American Airlines option over Air New Zealand/United for the trip to New Orleans because the timing and connections in the USA worked out better (and it was cheaper!). The plan was to arrive late Tuesday night, have a peaceful nights sleep to recover from 21 hours of flying, a leisurely morning, maybe a look around, then wander across the road for the conference kickoff at 3pm Wednesday.

Qantas did their part, Auckland to L.A., fine but then things started to go wrong…

Leaving Auckland about 6pm Tuesday means arriving in L.A. about 13 hours later at 10am Tuesday (thanks to the dateline). I was heading for Dallas, then New Orleans but found my anticipated 4 hour stopover extended to 5 hours due to rough weather at Dallas. Then after several additional 1 hour delays all the flights through Dallas were cancelled as thunder storms had settled in for the evening and the airport was closed.

That meant a frantic call (so glad I had a charged cell-phone) to re-book with seemingly all of America flying that way doing the same. The lines at the terminal counters and free-phones were hours long. While I was on the phone planes were filling up so fast they were losing seats in the time it took to ask if the route was OK then confirm. At one stage I was going to via San Francisco, Washington DC(?), Orlando then New Orleans but that evaporated and the next best offer was “sometime Saturday”. Not much use for a conference on Wed/Thur, a Jazz Fest on Friday/Saturday and when I was leaving on Sunday!

It wasn’t anyones fault and the American Airlines call centre were great trying all sorts of alternatives over more than 30 minutes to get me there on time. Thankfully a single seat came free on a flight that would work so I went from L.A. (about 10pm) to Miami, sat around there till 11am, then back to New Orleans. It added a couple of thousand kilometres flying & the result was the planned 21-hour trek actually took 39 hours, 18 of them sitting around in airports! Luckily I had taken a good book but I didn’t expect to read the whole thing on the way there!

I got to New Orleans less than 1 hour before the conference started, just time check-in, have a shower and get to the venue which was in another hotel a short walk away. I nearly missed New Orleans, but am glad I didn’t!

The rest of the photos are here. 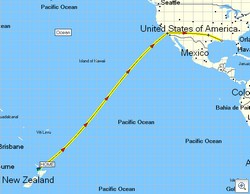 On Tuesday (24/04) I’m heading for New Orleans. This is a rather last minute trip to attend a retail conference with a few days added on for the Jazz Festival. Apart from sorting flights & accommodation I haven’t had much chance to think about the trip.

If there are any readers in New Orleans who’d like to meet up, or you have any advice on what is worth seeing/avoiding let me know via the “email me” link or comments.

The Building Mainstage featured ADT and Revit Building, Structure and much talk of BIM Analysis for Green Building certification. Nothing dramatic in terms of new product/features. The current Revit rendering, limitations of accurender, featured in the Q&A but no commitment when that may improve although Max linking was shown.

James Van's (SOM) session on Managing Large Revit projects was very interesting. He is the first person I've seen here present without Powerpoint as he rapidly switched to MindManager. Very cool to see MindManager used to an audience that, it seemed, hadn't seen it before.

Just came out of Beau Turner's session on Revit, Not your Dads CAD. I was a little late getting there & found out the "Sold Out" Sticker was no lie. The large room (500 seat?) was packed with many, including me, left standing, sitting, crouching around the sides. Still it was worth it for a interesting introduction to use of Phasing and Design Options in Revit.

I also got to meet Mark T from AVT RetailFOCUS which was great. He was visiting AU for the day and I last saw him in Orlando at the AVT user conference in Feb. Tonight its the "industry receptions".