Microsoft Office Outlook 2007 Message Editor, it's Word but it's not...

In earlier versions of Outlook there was an option to “Use Microsoft Word as your Message editor”. This meant other applications, like MindManager & SnagIt, which had Word integration also worked with e-mails. I often used MindManager “Send Topic to Word” and SnagIt “Send Capture to Word” while composing email messages, just like any other Word document.

It’s also the only editor as there is no longer a “Use Word…” option. This means applications that integrate with Word will not find the Outlook 2007 Message Editor and integrate with email anymore.

Both Mindjet & TechSmith are aware of this and I expect they’ll integrate the new editor with their applications in future updates. You can still copy/paste to the Message editor but it’s not as elegant. Something to consider if you are planning to upgrade to Outlook 2007. Continue reading "Microsoft Office Outlook 2007 Message Editor, it's Word but it's not..." »

What time is it? Outlook Time!

Have you noticed when working with .pst files Outlook seems to enter another dimension. Why bother with a “x time remaining” when it has no connection to the time the operation will take, or any clock I’ve seen. A progress bar without time is better than the wrong time!

This 60 seconds lasted about 15 minutes. All the data is on a local drive so it wasn’t waiting for servers!

This really is Part 3!  Even regular readers are forgiven for not remembering Parts 1 & 2 which were posted in, um, August 2004! The last line of Part 2 read: More to follow... I must admit I didn’t think it would be several years later!

Those posts covered how I track projects and activities with a combination of MindManager and Outlook. They showed how MindManager links to Outlook with the map topics creating and managing Outlook Tasks:

I use the same techniques today but my “work map” has evolved over the past couple of years! The structure is similar but there is a little more content and a lot more colour! What I didn’t show in 2004 is how I then use the tasks generated to fill in my Outlook Calendar to record activity and time. 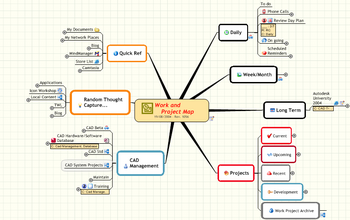 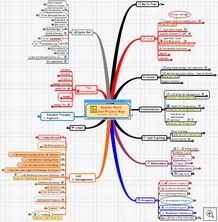