This is off topic for the CAD Blog but if you have any interest in science and/or art you must see: 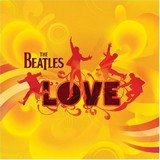 Time to go off topic… Sadly it’s not a tale of romance, passion, or even lust in Las Vegas but this sort of relates to Autodesk University as it was just across the road!

While in Vegas I saw the new Cirque Du Soleil show "Love" at The Mirage. Before saying any more I should make a couple of statements:

I was wandering past the theatre box office and stopped to take a couple of photos. The ceiling with it’s chrome domes and back-lit Union Jack along with the psychedelic rainbow floor were cool.

It wasn't long before show-time & decided to see if they had any seats left. There were a few which is how I came to be sitting in row 5 only a few metres from the stage. The theatre is circular with multiple runways to a centre stage and audience seating in wedges between them. Above the seats high resolution screens nearly surround the theatre.

The show takes you from wartime Britain to the Sixties with a heavily reworked Beatles sound-track. At times The Beatles are part of the performance and the rather obvious problem of them not being there is cleverly handled. The show features all the acrobatics, stunts, dance and wonderful staging you expect from Cirque Du Soleil but I think it’s enhanced by a familiar sound-track. What amazed me was the quality of the sound system and recordings. These tracks started life in the Sixties but the reproduction was so good it was obvious that a lot of time has been spent re-mastering and cleaning them up. Some of the songs were traditional Beatles performances, straight from the records, others totally reinterpreted. I really liked a tongue in cheek rendition of ‘Blackbird’ – from ‘The White Album’ – with broken birds trying to fly...

There is heavy use of video projection, multiple screens and clever physical effects, like cloaking the entire theatre in cloth, to help out with the more psychedelic tracks but that was only one aspect of the show. It’s a real tribute to the variety and quality of The Beatles catalogue that a such wide range of music and emotion can be found in their work.

Combining the performance, amazing set & staging, and a Beatles sound-track results in a stunning experience. Totally recommend it, in fact, Loved it!

What is a CropLog (nothing to do with farming), it is a map log (sort of blog) of the Fairport Cropredy Convention, an annual 3 day music festival with generally folk, folk rock, rock and blues performers.

It finishes with Fairport Convention performing Meet on the Ledge written way back when by Richard Thompson backed by all their pals.

This CropLog is being created using MindManager Pro 6 on a Tablet PC and exported to the web pages using Map4Web from MindBusiness.