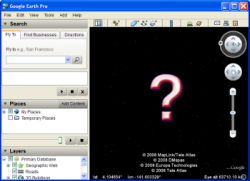 I don’t use Google Earth often and, although happy not to have to deal with disappearing Earths, didn’t really think much about it. Last week I got a link to a blog post by someone who has clearly thought about it a great deal.

Duane's hypothesis is rather intriguing, especially for Esri GIS users.

"Go large or go home" they say, so here goes. Here's my take on the new GooEsrigle relationship.

The world wide Geo-spatial industry will be turned on its head, 20th July 2015. I for one will be watching the Plenary live if anyone will stream it. If not all this, then at least Google Earth something something something.

.. Lock stock and several smoking barrels Google has purchased Esri, and likely this was late last year. If I had a spare several billion, I'd buy Esri just so Apple and Facebook couldn't….

Use of Google Earth Pro requires a valid license key. As of January 20, 2015, Earth Pro licenses are now free. After getting your Earth Pro license, you can register, download, install, and sign in to start using Earth Pro's advanced features.

If you do not have a key, use your email address and the key GEPFREE to sign in.

Thoughts on the demise of Google Reader

“We launched Google Reader in 2005 in an effort to make it easy for people to discover and keep tabs on their favorite websites. While the product has a loyal following, over the years usage has declined. So, on July 1, 2013, we will retire Google Reader.”

Who cares about RSS? I do! 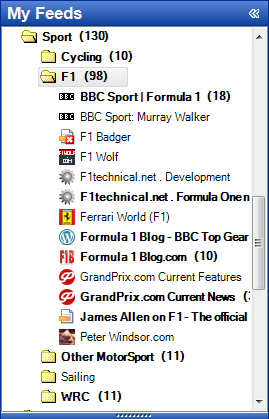 Google cite declining Reader use and I wonder if Twitter and Facebook have killed RSS? While I use both, tolerating Facebook and loving Twitter, I still use RSS in the way I used to use newspapers!

I don’t read all the content of all 1200+ feeds I subscribe to but use them to get information about a subject when I need it.

Today the Formula 1 season begins so I’ll review the bunch of Formula 1 site feeds I follow for the the first time in months. I was a work when Samsung launched the Galaxy S4 but reviewing my mobile IT feeds is the most efficient way to catch up with that.

While Twitter can tell you a post is there and is awesome for near live interaction there is no way it can compete with RSS as a knowledge aggregator. Tweets just disappear too fast. Facebook only tells you what others are interested in via a crappy web interface!

Looking for an Alternative?

Although I had imported my feeds into Google Reader — primarily for travel access — on the PC I use an off-line reader. The demise of Google’s Reader doesn’t really worry me but I am looking for an alternative to RSS Bandit.

It began as a .net demo project from some Microsoft Employees and was then made open source. Development has stalled — last updated in 2009 — so I’m on the search for a good Windows 7 (work), 8 (home) and Phone RSS reader. Ironic that I was seriously considering converting to full on use of Google Reader!

I was hoping to find a good Windows 8 Modern reader but the few that I’ve tried haven’t impressed. Many, like iPhone/iPad, apps rely on Google Reader API and just present the info it provides or they just collapse in a heap when my 1200+ feeds are imported.

I was somewhat surprised this Google ‘spring clean’ spared the Feedburner feed service. I’m glad as my own TypePad feeds use FeedBurner for a few reasons:

FeedBurner was a great company, innovative and responsive to user feedback. Then Google took over and I thought it would develop further. How wrong that was! Apart from porting the reporting to their ‘Google Analytics look’ Google have pretty much ignored it since acquisition.

I regard FeedBurner as being on death-watch as Google have killed their FeedBurner blog, Twitter account and Adsense for [RSS] Feeds. Seems like RSS is dead for Google. FeedBurner has also become unreliable with quite frequent ‘0 report days’ Google don’t seem to give a damn about fixing. 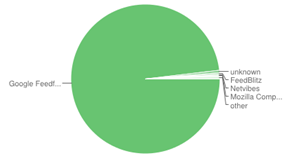 One thing the demise of Reader may reveal is the worth of Google’s feed statistics. According to Feedburner the vast majority of my 9000’ish feed ‘subscriptions’ are from Google Feedfetcher.

I have often wondered about the validity of this number, even tested it. When Reader goes will they disappear too?

* Google Feedfetcher: Feedfetcher is how Google grabs RSS or Atom feeds when users subscribe to them in Google Reader or iGoogle.

Yay, Google Maps now has cycling directions for New Zealand and Map Maker tools so we can add updates.

Below you can see Google Maps suggested route from my suburb to the city. It routes cycles to the North Western Motorway (or freeway for US readers) in preference to a shorter suburban road route. Although cycles are not allowed on the motorway there is a cycle path beside it which is the safest way to town.

The current route misses a short section of cycle path near Henderson and in the city. You can use the Map Maker tools to fix this and improve the map for others. See the details at:

From the beaches of Goat Island and the slopes of Mount Eden to the hallowed soil of Eden Park, New Zealand is filled with both natural and man-made wonders. This week we’re bringing two new features to Google Maps in New Zealand that we hope will help Kiwis better explore their world: cycling directions and Google Map Maker. Biking routes improve the overall comprehensiveness and usability of the map, while the ability to contribute your local knowledge via Map Maker will help ensure that the maps remain accurate and up-to-date…

There aren’t many people in New Zealand but we have more cars/head than most (~2.5 million cars/4 million people). Then consider not far off half the population live in one city and it is squeezed onto a narrow isthmus between two harbours*. So we do have traffic and now so do our Google Maps (UPDATE 2012-04-13: and Google Earth):

Kiwi automobile commuters, we want to reduce your time stuck in traffic. Today we have expanded our live traffic coverage in Google Maps to cities in New Zealand. 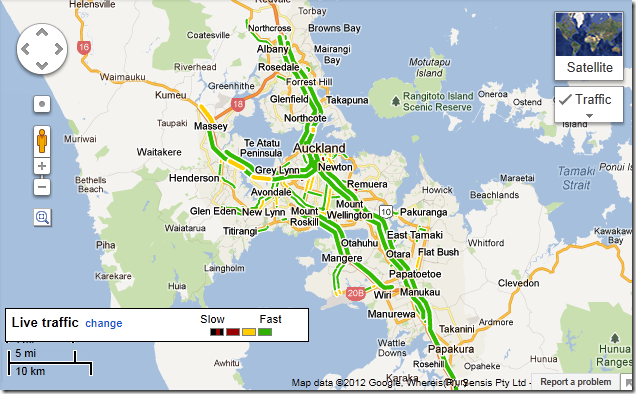 * My Glen Eden to Northcote daily commute is not far short of a cross country drive but only takes about 30 minutes. 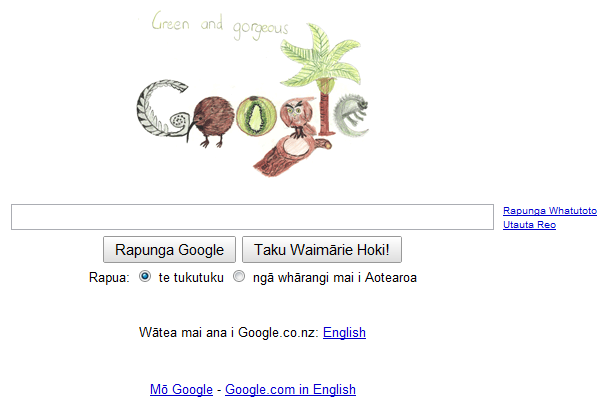 Today we're celebrating Kiwi kids’ return to school on the Google New Zealand homepage - with New Zealand’s inaugural Doodle 4 Google winning image replacing the Google logo for the day.
Last year, for the first time, Google asked New Zealand students to give the Google logo a uniquely Kiwi makeover by creating a doodle to reflect the theme of ‘My New Zealand’. Eight-year-old Amelia Abbott of Nelson won the competition with her entry, ‘Green and Gorgeous’, and today's it's proudly on our home page for all to see….

Google Earth Pro and the end of the world

My Google Earth Pro license expired. This was entirely my fault as Google Earth does warn you to renewal time is approaching but I hadn't used it for a while and forgot. However, because our firewall blocked part of the transaction process I was unable to renew it immediately.

You'd think, since there is a free version, it would just revert to "free mode" but not so. It refused to load any data until the license was updated. That was rather embarrassing as when it was needed, it was needed!

Once away from the firewall restrictions the renewal took only a few minutes Next time I'll take more notice of those warnings!

Disney have just released a remarkable 3D model collection on Google Earth covering the massive Walt Disney World® Resort, Orlando. The level of detail is incredible to the as you can see in the comparison below. It shows Google Earth and a photo I took at Autodesk University 2005 – the photo is on the left, no it’s on the right!

You can explore all the parks and many of the surrounding resorts. It does take a while for some of the more complex models to download, even with broadband, but it’s quicker than the days it takes to see it all in the real world!

This revolutionary project features 3D models of our four Orlando theme parks and more than 20 of Disney’s Resort hotels. Incredible in scope -- containing over 1,500 3D models -- Walt Disney World Resort in 3D is the most detailed 3D rendering undertaken on Google Earth to date.

Design productivity secrets from "Google User Experience", and a flaw in their UX?

“UX is an acronym for User experience" but many of the principles discussed in this ChangeOrder post apply to all design projects, especially the tips about design presentations.

Last Thursday, I attended a free session organized by SIGCHI, Puget Sound region at Google Seattle HQ. Jake Knapp, a very well-spoken user interface designer, entertained a packed house with a speech on 17 tactics that he uses for creating strong UX work in "the flood" of projects that pour through his UX department from month to month…

As a Google user, isn’t everyone on the net?, I have pondered one aspect of their Homepage (it’s even seen in the ChangeOrder Post!). While I understand their drive for simplicity it would be nice if the menu could sense, and cope with, a wider screen. Flying out a menu when there’s ample space for it’s contents doesn’t enhance my Google UX!

Google recently launched a localised version of their New Zealand map. We’ve had basic road/location info since last year but this adds search and links to local directories. It will even help you buy a parrot that’s not “resting”. 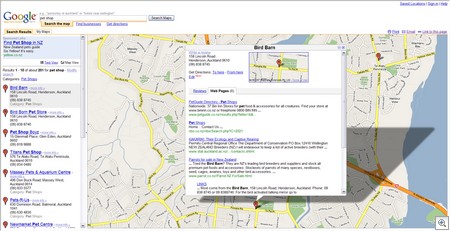 It’s a long-haul flight to nearly everywhere from New Zealand. Often you crawl off the plane with a sense of achievement for merely surviving the flight. Spare a thought for the little Godwit “E7” who is about to complete a 30,000km round trip from New Zealand to Alaska.

There have been many theories, and a few myths, about the flight of the Godwit. Many remember it as the symbol for our domestic airline – National Airways Corp – (before it was merged with Air New Zealand) and from popular children’s books. 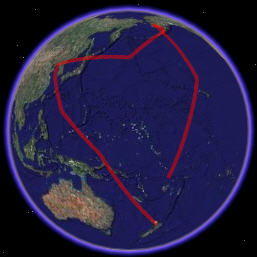 Satellite tracking and Google Earth combine to enable anyone to see the E7’s track. Many birds were tracked to Alaska, via China, but only E7’s transmitter has lasted long enough to record the remarkable 11,500km journey home direct across the Pacific. Hopefully E7 is here by now and having a good rest.

Godwit expected in NZ safe today - Christchurch News - The Press
A feathered harbinger of spring was expected to land safely in New Zealand last night. The 30,000km round trip of the Godwit from New Zealand to Alaska and back again has been tracked by satellite for the first time…

The Pacific Shorebird Migration Project Webpage has maps, information and a kmz file download to view in Google Earth: 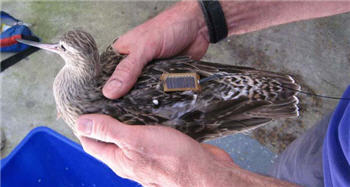 UPDATE 12–09–2007:
Bar-tailed Godwit E7 returns after a marathon flight - Asia-Pacific Shorebird Network
E7 – a female Bar-tailed Godwit fitted with a satellite transmitter at Miranda, Firth of Thames in New Zealand on 6th February returned to the place of tagging on the evening of Friday 7 September (local time) after a logged flight of 29,181 km (about 500 hours of flying). During that time she flew to the Yellow Sea, where she stayed for five weeks before flying to Alaska to breed, then flew 11,570 km back to her regular non-breeding site in New Zealand in about 8 days 12 hours.