I’d like to say it is blog’iversary time again but I’m about a month late posting this as the anniversary was back on Saturday March 31st. I knew this post would be late but will never forget why. I was on a bicycle heading for Cape Reinga, New Zealand’s northern tip, and was happy to complete that with a bicycle circumnavigation of the iconic (in NZ at least) lighthouse. Things have been a little slow here recently due to the travel but it’s time to finish a whole bunch of Autodesk University (yes still), 2013 Release and Autodesk 360 draft... Read more →

There aren’t many people in New Zealand but we have more cars/head than most (~2.5 million cars/4 million people). Then consider not far off half the population live in one city and it is squeezed onto a narrow isthmus between two harbours*. So we do have traffic and now so do our Google Maps (UPDATE 2012-04-13: and Google Earth): Traffic Conditions for New Zealand on Google Maps Kiwi automobile commuters, we want to reduce your time stuck in traffic. Today we have expanded our live traffic coverage in Google Maps to cities in New Zealand. * My Glen Eden to... Read more →

Register to see Autodesk’s “Lead The Way” Virtual Event, while I’m on my bike! 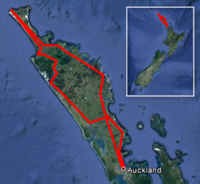 In late March I’m off to tour Northland — the north of NZ’s North Island — with a bunch of similarly crazy cyclists. Ten days of cycling a mainly coastal circuit around the beautiful Northland scenery. I just hope some summer weather we haven’t had yet arrives really late! The area is very familiar, unlike previous South Island & Vietnam cycle trips, Most of it is within a (long) days drive of my Auckland home and the location for many childhood family holidays. I have cycled most the route before but that was long ago (I was 17!). In those... Read more →

Click through for a classic Geek & Poke: Thank God Not Everything Is Software . Read more →