It's a visual world... - AutoCAD and Architectural Desktop 2007

They say it's a visual world and that is the theme of the 2007 releases. Creating, editing, navigating around and rendering AutoCAD 3D has been made significantly easier, heck it’s just plain fun!

To achieve this the AutoCAD has had a significant overhaul and this core benefits all the “Desktop” vertical products. This post covers a few of the new visual features you’ll experience while working in the AutoCAD environment. 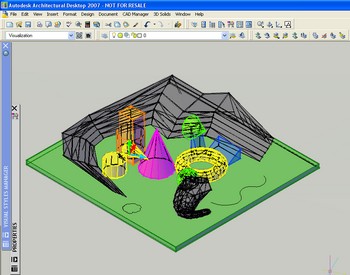 DWG Files: A new look for a new format

First sign of this new AutoCAD world is a different

In addition to the good old wire-frame views, we know and love, 2007 offers a new conceptual and realistic views. The conceptual view uses a non-photo-realistic method known as “Gooch”. It simulates a technical illustration feel by controlling the contrast of shading, shadows and edges. The realistic view shows materials and shadows in almost render quality. These shaded views are seen in the working environment and do not require lighting or rendering setups. Just pick a preset then play!

When you are ready for rendering, physically accurate materials and lighting, including Sunlight, is available along with a new rendering engine. This uses the Mental Ray renderer, as seen in Viz/Max. Yep, high quality rendering right inside AutoCAD/Autodesk Architectural Desktop.

To support this a graphics performance tuner audits your hardware on install (or command) and recommends the optimum settings. As you’d expect high spec cards will give better results but the screen-shots below are from a fairly old low spec machine I use for beta. Look for more information on graphics settings and hardware from Autodesk at release time.

Ok, I can now admit I used ADT’s easy to edit Mass Elements for modelling if possible to avoid editing AutoCAD 3D Solids. I’ll let the AutoCAD blogs cover it detail but 3D Solids are now easy to edit with grips allowing stretching and complex edge & face geometry changes in a click. Extrusion, lofting and other 3D edits are more powerful, yet easier to use. Many have preview or tuning dialogs that allow you to see the change before committing to it. You can also see some of the new edge and silhouette display effects giving an AutoCAD an artistic look. Don’t try and figure out what the design is, I was just playing with the new tools! 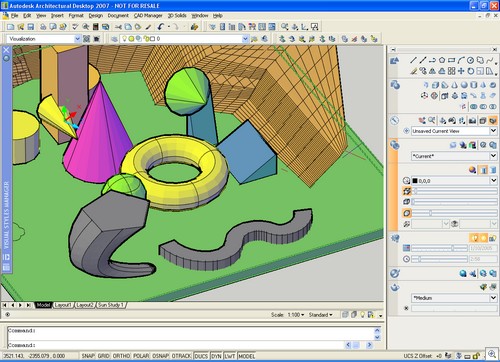 Working in a virtual world

The screen-shot below shows the “Visualisation” workspace in ADT (AutoCAD is similar apart from the menus). The workspace feature, introduced in 2006, is used to reconfigure the interface to suit different tasks. There are several presets supplied, for 2D and 3D work, which you can then personalise as you wish.

All the working controls for Creation & Editing of objects, Navigation (Zoom, pan etc), Display (appearance), and Rendering (Quality, Lighting) have been combined in the new “Dashboard” Palette. It’s docked in the screen-shot below but can be floated and placed anywhere. You can also see the 3D cursor which combines with a new “Dynamic UCS” system (DUCS) to make editing in 3D isometric & perspective views much easier. Yes you read that right, you can finally edit in AutoCAD perspective views! 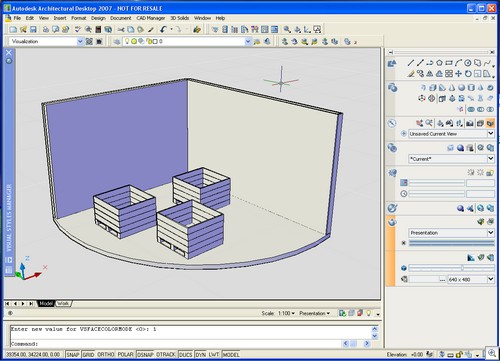 The screen-shot below is very much work in progress but shows editing in a realistic perspective view. This will be great for sharing designs even early in the design process. 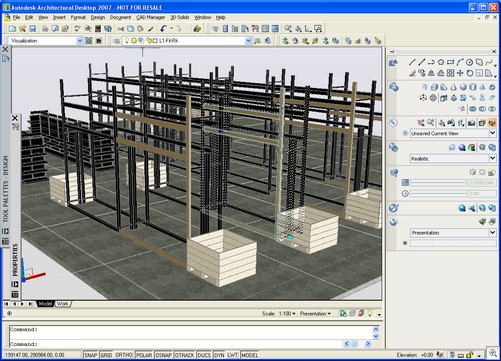 This DWF attachment gives an idea of the 2D output quality you can expect. All the viewports on this a1 sheet were set to default display presets and lighting. I suggest you zoom in to see the detail level offered. Shaded views are rendered as images in the DWF.

Note: This file may require/request you to update to the latest DWF Viewer – Version 6.5.

So far you haven’t seen any rendering. All this has been screen or plotted output. There is a powerful new rendering tool-set built in to the core AutoCAD product. ADT uses this but also supports the previous technique of linking to Viz Render/Viz should you require that work-flow. Look for more on this and other new features in future posts

It's a visual world... - AutoCAD and Architectural Desktop 2007

They say it's a visual world and that is the theme of the 2007 releases. Creating, editing, navigating around and rendering AutoCAD 3D has been made significantly easier, heck it’s just plain fun!

To achieve this the AutoCAD has had a significant overhaul and this core benefits all the “Desktop” vertical products. This post covers a few of the new visual features you’ll experience while working in the AutoCAD environment.