Traffic Light Thought – So Hybrids can be fun?!

A recent work trip meant my first chance to drive a Hybrid car, Toyota Camry, and it was revealing.

I regard hybrid technology as a poor compromise rather than the best of both worlds. An optimised internal combustion car would not lug heavy, expensive battery packs or the complex electro-mechanical hardware required to manage the mix of power sources. Pure electric can, well should, consider far more radical design unencumbered by the mechanical, cooling and transmission layout requirements of a conventional engine. Hybrid just means both powertrains are compromised to some degree to live with the other.

First problem was getting the thing started. Although not a hybrid feature I don’t really see the advantage of proximity key start/stop button systems. A petrol Camry I drove recently also had it and, maybe old habits die hard, I’d rather just have a normal key. At least you know where it is!

Next step was finding a power source for my phone, and more importantly its GPS software. I searched for ages, much to the amusement of another rental driver, trying to find the 'cigarette lighter’ or equivalent. For your future reference the power outlet is at the back of a deep lidded compartment at the base of the centre console. On a gloomy evening it took a fair bit of finding!

It was a bit odd just getting a “Ready” light and zero noise when setting off in pure electric mode. Once on the road things seemed pretty normal apart from the techno display of power being managed in the instrument panel. To be fair the Camry has a pretty conventional dash (no tree diagrams like some hybrid Hondas) and you can swap the multi-function display.

Things got a strange again at the first red traffic light. My years of driving older cars made the start/stop engine behaviour a little disconcerting. Before this car if the engine stopped in traffic it wasn’t going to start again without user, or mechanic, intervention! Thankfully the Camry burst into pure electric or hybrid life instantly depending how urgent a departure you ordered via the accelerator.

I was impressed how smoothly the transition between the various drive states occurred. A barely noticeable change when swapping between electric & petrol mix, more sound than feeling, and smooth transition from regenerative to real braking. There was more marked (akin to a conventional auto down change) when the “B” braking transmission mode was selected.

I believe this invokes a mix of conventional Otto cycle (rather than Atkinson Cycle) petrol engine braking and regenerative charging. It was certainly capable of doing a ‘no brake’ deceleration from open road to town limits in an acceptable distance or holding speed on quite steep hills.

Clever, but fun to drive!?

It may seem bizarre but this 2.5 Litre Hybrid medium large sedan bought back memories of my old Uno 45. Although a totally different era, size and style of car with much better performance the Camry was ‘fun’ to drive in a similar way.

The Uno, with maybe 45 bhp from its 999cc engine when it left the factory, was never going to be fast but was a pleasure to drive rapidly. Since you were going to struggle to gain velocity the technique was not to loose it! Achieving that required great anticipation to make the most of what ever momentum you had.

Driving the Camry encouraged a similar approach. Can I move off, how far can I go before waking the petrol engine? Can I regen-brake from open road to town limit without touching the brakes?

Without thrilling speed or particularly dynamic handling it was actually fun to drive. Although interesting technically the drivetrain wasn’t particularly rewarding. Smooth & quiet is fine but I prefer the sound, not noise, and character of a good conventional engine.

At $720/year saving you’d have to keep your Hybrid for more than sixteen years just to break even. That’s assuming the battery lasts that long and there are no finance costs which mean you’d be paying interest on the hybrid premium.

Hybrid driving might be, unexpected, fun but I still don’t see how the economics stack up unless you travel huge distances. I even wonder about the environmental benefits compared to an efficient conventional car. What is the true environmental impact when you factor in the exotic materials and potential life of the hybrid power source?

After 13 years  3 months  & 9 days the mighty Uno 45s has gone. It has travelled 247,000km, 192,000 in my hands, but is unlikely to do many more. A recent WOF signalled rust that was un-economic to repair so the time had come to part. However, it has gone to a Fiat fan so bits will survive, to keep other Uno's alive,  or maybe it will be resurrected.

So I'm back to owning just one Fiat, farewell RH! 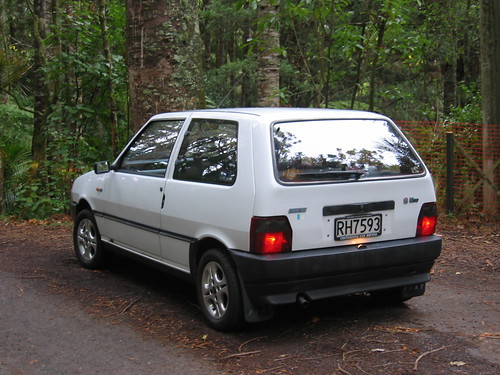 Business Pundit have  a pretty good summary of how Obama's move to help out Fiat, I mean, Chrysler will play out:

Chrysler/Fiat Merger: It’s All About Fiat

Fiat, the Uno for Chrysler?

It is about the bike 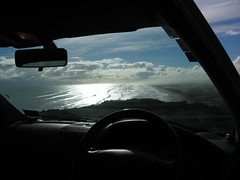 I've started a "My Cars" collection on Flickr for images which, in any way, feature the Fiats of my life. I’ve never owned any other brand! 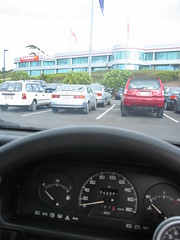 250,001km in an Uno
Originally uploaded by RobiNZ
I thought I'd blogged this back in January but it seems not. 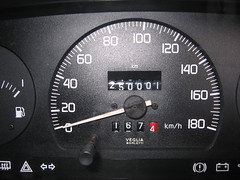 The Uno lives, another six months...

It’s the six monthly Warrant Of Fitness, road worthiness inspection, time again. Seems like just last month when I got the last one! Where did the last six months go?


It was quite busy, and a nice day, so I sat outside near where the verdict is delivered. I was actually expecting them to find something and noted other car faults while I waited;


Then out it comes, the inspector jumps out checklist in hand… oh dear… then turns and starts scraping off the old WOF sticker!

The Mighty Uno got through with no problems. Barring accidents (or Lotto wins), seems I’ll be pedalling it for another six months…

It’s the six monthly Warrant Of Fitness, road worthiness inspection, time again. Seems like just last month when I got the last one!

Where did the last six months go?

The Mighty Uno, now at 246,508 km, got through with no problems. Barring accidents (or Lotto wins), seems I’ll be pedalling it for another six months…

Is this my next car?

The old battered white Uno is getting near end of days. I kind of feel obliged to get it past 1/4 million Km's but that’s only a few months of city commuting away. Then there is the question of what to replace it with. I have some requirements but finding something that meets them all is a challenge. It must be:

This car meets the bill, it’s due in New Zealand next year…  Brmm, Brmm

Fiat Grande Punto Abarth Driving Video - Via carscoop.blogspot.com
The 155Hp 1.4-litre turbocharged GTi on a twisty Mediterranean mountain route. Abarth will rollout the Grande Punto in Italy during September 2007 with plans to expand to additional European markets in early 2008.

After months of eager anticipation, Fiat has released details of the Fiat Punto Abarth, the car that marks the return of one of the industry’s most respected performance badges and is on sale in Italy this month, with New Zealand arrival due in mid-2008.

The Punto Abarth is fitted with a 1.4 turbo petrol engine, delivering 116 kW. Combined with a six-speed manual gearbox, the engine gives the car a top speed of 208 kmh, accelerating from 0-100 km/h in just 8.2 seconds.

The Punto Abarth is not just a high performance small car – it is also safe, and environmentally friendly… (cont) 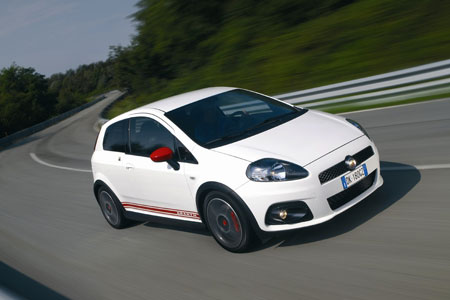 PS: Is white back in fashion for sporty Fiats?
Tags: Fiat+Grande+Punto+Abarth 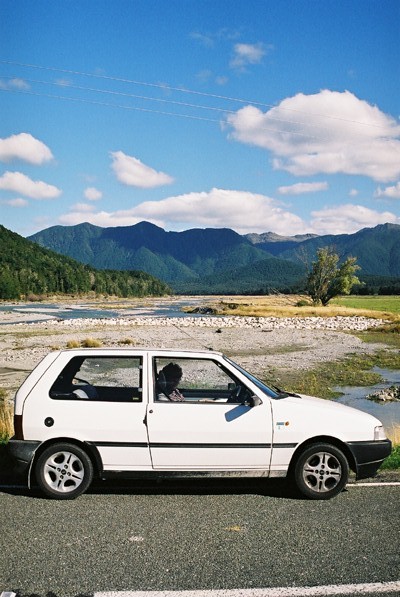 Yes I do have a white Uno. Yes it does have a few paint chips, dents and dings but they are the result of 245,000 km commuting, stones, errant supermarket trolleys and the like.