McLaren, on the trail of Bruce McLaren in Auckland

Woking, England, is the home of the modern McLaren but their founder is a Kiwi icon. They returned to New Zealand to retrace, in the 650S Spider road car, some of Bruce’s formative drives and visit the many McLaren related landmarks around Auckland. On The Trail Of Bruce McLaren - cars.mclaren.com Today McLaren’s home is in Woking, England, but the story started nearly 80 years ago on the other side of the world. We return to New Zealand in a 650S Spider to trace the early years of our company’s eponymous founder, Bruce McLaren… They are familiar to me and... Read more → 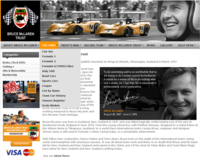 Great to see the revamped Bruce McLaren Trust website back on-line with impressive new site. An amazing historic resource and lots of information on the Trust’s activities. Bruce McLaren Trust - www.bruce-mclaren.com In July 1990 a small memorial trust had been formed to honour Bruce. Upon its closure in 1995, it was realised by the McLaren family and Ross Jensen that there was a need to form a permanent trust. Therefore in response to repeated demands to commemorate Bruce McLaren's achievements and honour him as one of New Zealand's international heroes, the new Trust was formed by Ross Jensen and... Read more →

A minute of silence for David and Bruce McLaren

I didn’t know either directly but today marks the passing of two McLarens. Bruce McLaren, who founded McLaren Racing, died forty years ago and David McLaren, a colleagues father (and not related), was farewelled by family & friends today. In one of those small world connections I discovered David and my Grandfather probably worked together at NZ Retailer - Farmers Trading Company. He managed retail departments in the flagship Hobson St Store/HQ and my Grandfather ran the in-house printing department in it’s basement. Both were with the company over thirty years and, while I was too young to remember and... Read more → 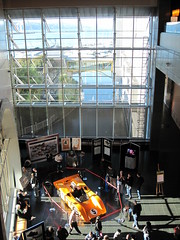 This is one reason to be at Te Papa next weekend, a special session at the Formula One™ - The Great Design Race Tour Exhibition ; Formula One – Expert floortalks - Museum of New Zealand Te Papa... Read more →

"Formula One ™ – The Great Design Race" coming to New Zealand

Te Papa - Formula One ™ – The Great Design Race Thrilling, seductive, and addictive, Formula One is among the world’s most popular sports. This exhibition traces the development of the Formul... Read more → 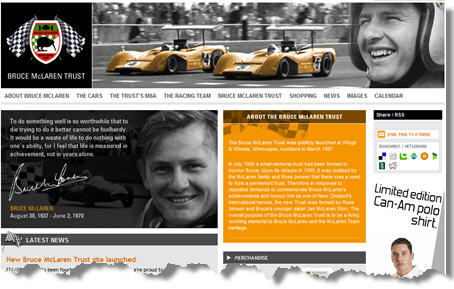 The Bruce McLaren Trust website has been redesigned and re-launched with loads of new content covering the Bruce McLaren Story, Heritage and Trust activities. The site was developed by Parkside Media... Read more →

Ferrari Vs McLaren, the dilemma

New Zealand legend Bruce McLarens amazing life and achievments are going to be the subject of a feature length film. Many are familiar with the McLaren name from Formula One but often are unaware of t... Read more →