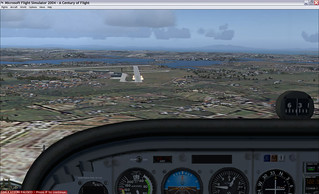 It appears, from this, Codemasters’ upcoming F1 2010 release will be more than a “game”. As an avid F1 fan I can’t wait to see if the physics and game engine match the visual feast. Read more →

Who’d have thought Flight Sim could rock, I hope this isn’t “as real as it gets” Read more →

Microsoft have released a preview of the upcoming Flight Simulator X. Only a 640mb download away, it’s an impressive look at what the release will offer. The trial version includes two airports, three missions, and three different aircraft all based around St. Maarten in the Caribbean. It installed and configured itself seamlessly, defaulting to medium-low for most graphics, on my machine. In that mode it seems to run at least as well as FS 2004 & most things seem to work, even ATC. The only glitch I’ve noticed is the losing the view on 3D cockpits and naked cars (model... Read more →

Robert posts an image of a cool airport: A Welsh View: Cool Airport Is it in Microsoft Flight Simulator I wonder? Of course it is Read more →

Interesting comments on the Microsoft Flight Simulator graphics engine and how it manages both back compatibility and progress from “The Little Wheel Goes in Back” Blog. Backward compatibility | The Little Wheel Goes in Back “I just finished reading a couple pretty extensive threads on AvSim on how important customers think backward compatibility (specifically to accomodate third-party add-ons) should be when designing the next version of Flight Sim…” Update: 00:46:41: Steve Lacey on the same topic Backward Compatibility In Flight Simulator | Random Thoughts “I've lost count of the amount of times that I've read on forums "Why can't Flight... Read more →

This is funny and a bit tragic, unless you are a credit card fraudster! I’ve noticed how little notice most places take of your signature but this tests it to extremes… The Credit Card Prank – How crazy would I have to make my signature before someone would actually notice? The Credit Card Prank 2 – How far could I go before they would check my credit card signature? Read more →