Alfie bails out of the local park walk | COVID-19 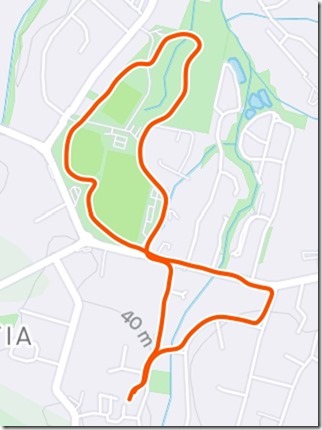 On the Parrs Park through road, near the school classrooms, Alfie just flat out refused to go any further. All four paws locked up, legs scrabbling into reverse, 180 degree turn, tail down, ears back ‘out of here’ mode. A second attempt, same result

The park was really quiet, nothing different to the last decade we’ve done this walk (albeit usually as part of a much longer one) other than a rather ominous cloud overhead. I wonder if he heard thunder (I didn’t) but whatever, today it was back to normal! 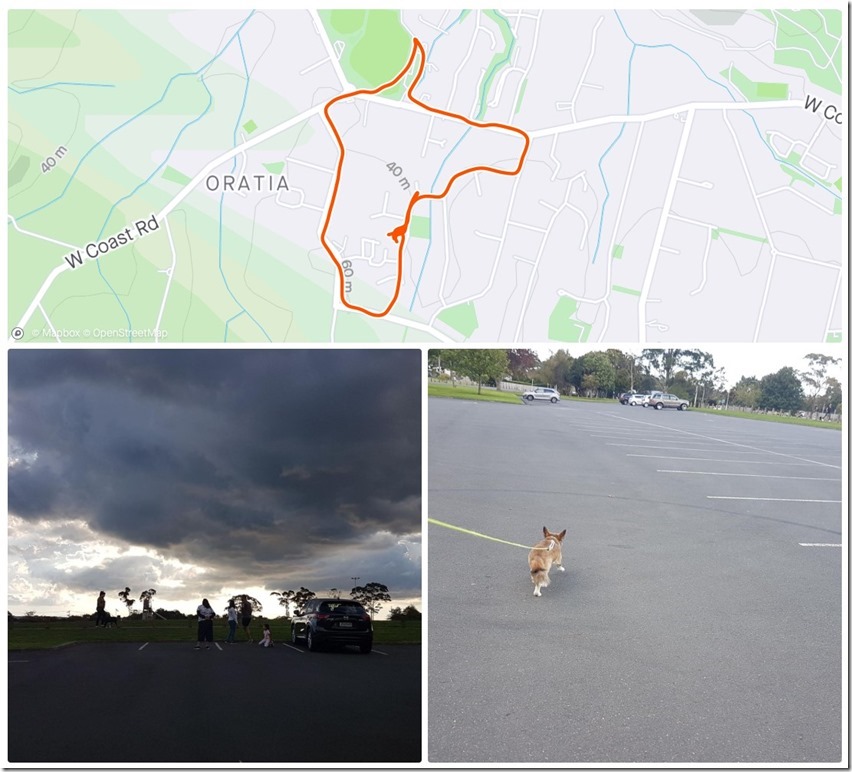 Alfie is (un)dressed for summer 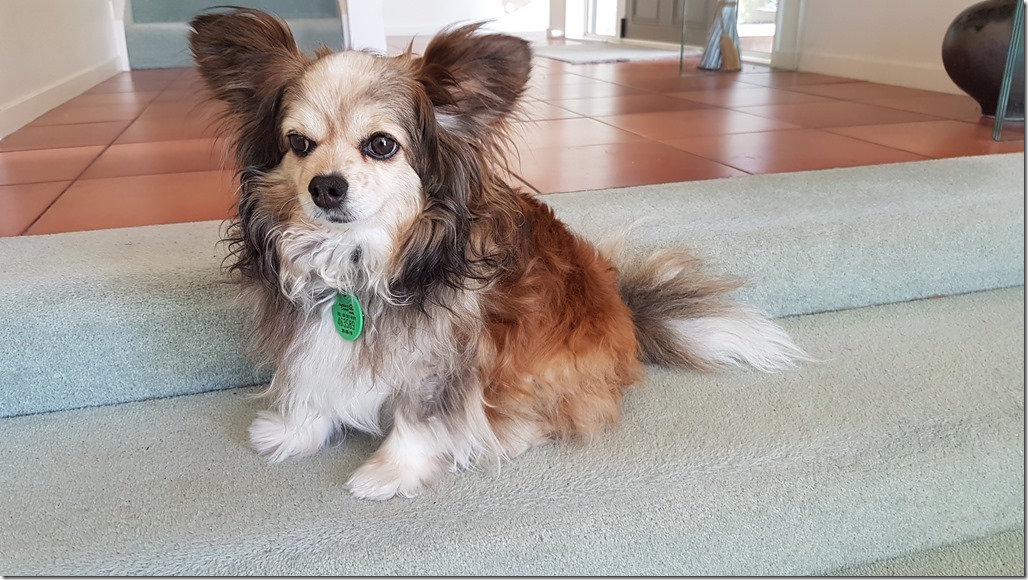 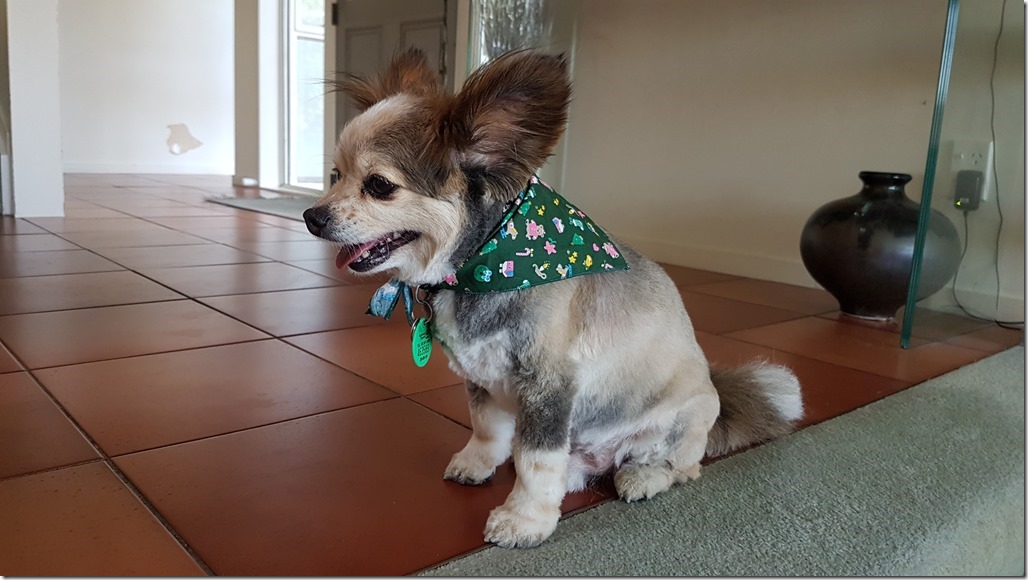 On the 11th hour of the 11th day of the 11th month of 1918, the guns fell silent along the Western Front. The First World War had effectively ended. In addition to permanent memorials these Fields of Remembrance in Auckland, Wellington, Christchurch and Dunedin commemorate this important centenary and honour the New Zealanders who served in a conflict which touched every community. Below, just some of the 18,277 crosses in the Auckland Domain which represent every NZ soldier killed in World War One. 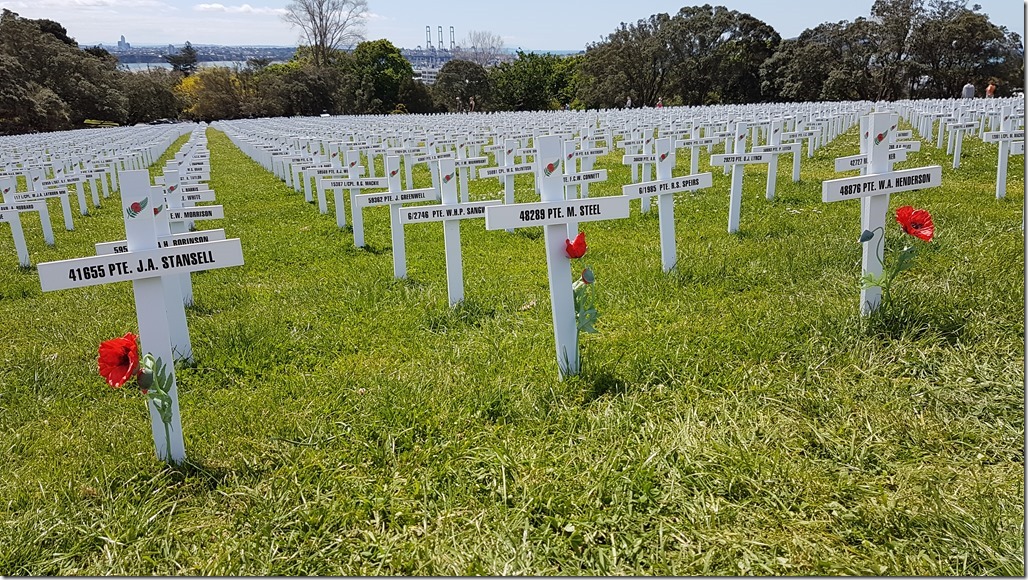 On a sunny afternoon, in a peaceful country, a tiny mind can’t comprehend the reality memorials like these represent; and either can Alfie. 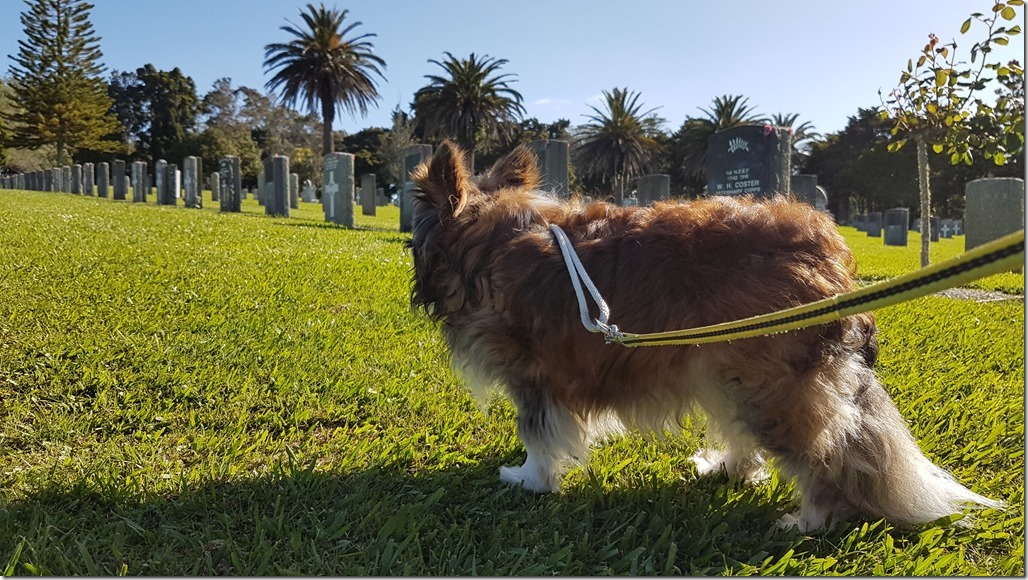 My Mum never knew her Grandfather who died on the battlefield in the last few weeks of World War One. Although born in Australia, of German emigrants, he served for NZ where he had settled and married.

He fought for King, Country and Empire against, possibly, his own distant relatives. The world is a strange place.

The words of another WW1 Veteran, heard in Roger Waters song “The Ballad of Bill Hubbard", perhaps best sum up this conflict, many conflicts;

“At the end of any war, everyone sits around a table and comes to some agreement. Why don't they do that before the war instead?”
Alf Razzell, Royal Fusiliers, WWI

Today does not pass without remembering those who have served, one in particular.

My Mum never knew her Grandfather who died on the battlefield in the last few weeks of World War One (which ended 11th November – 1918). Although born in Australia, of German emigrants, he served for NZ where he had settled and married.

He fought for King, Country and Empire against, possibly, his own distant relatives. The world is a strange place.

The photo below is a poignant memorial set up in front of the Auckland War Memorial Museum. 4799 crosses, one for every Aucklander who died in WW1. Ernest, who was from Christchurch, is not represented there but it is a sobering reminder of the impact the war had on a young country on the other side of the globe. Lest we forget. 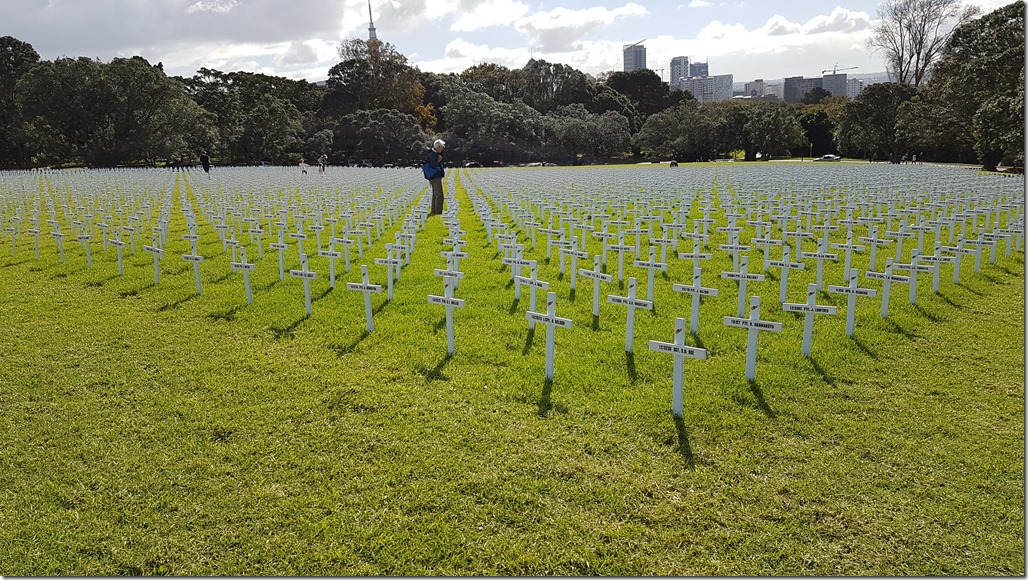 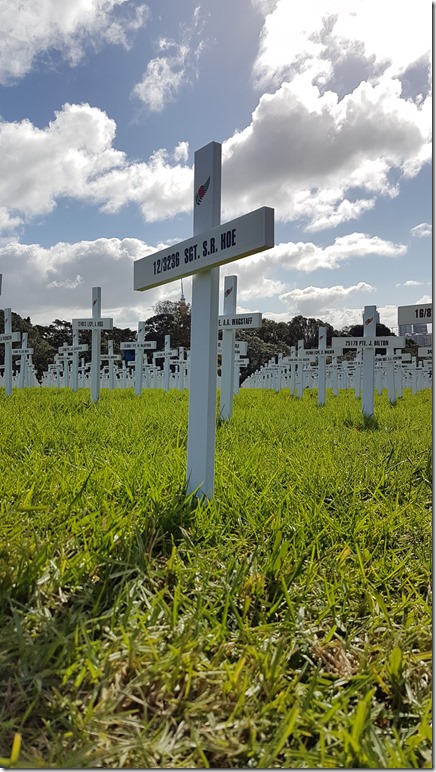 Alfi 1 and Alfie too

I’ve passed this Alfa Romeo parked on the roadside many times. Finally stopped and took the photo that was begging to be taken. Alfi the car, meet Alfie the dog. A couple of years ago I wrote about a relatives amazing retirement project. After a lifetime of amateur and professional flying yesterday John made his last flight.

Don’t really know the details yet, beyond what was in the newspaper report, but as with all aircraft related accidents there will be a full investigation. It was a real shock and great loss to his family, friends and the Waikato aviation community. 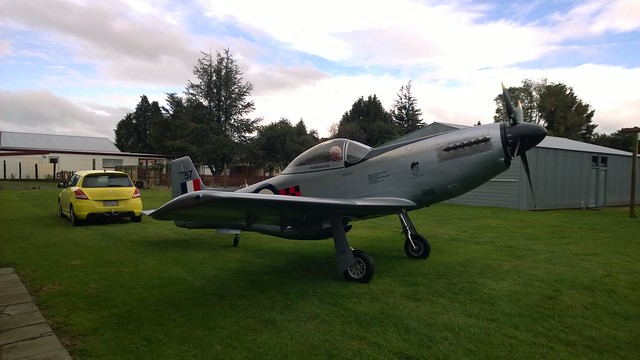 Below: John in command of a Cessna Crusader twin between Matamata & Hamilton. I took this from the co-pilot seat on a flight where, closely supervised, he let me have a short turn at the controls. The only time, so far at least, I’ve flown an aircraft that wasn’t a computer simulation. 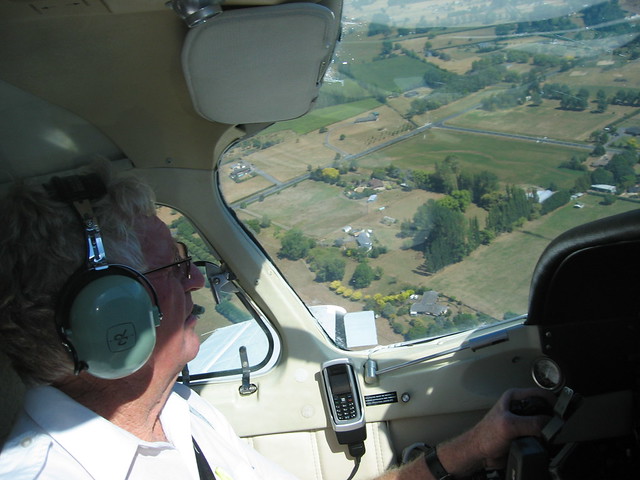 Not sure how long this will be on-line, Stuff Media’s (CHRISTINE CORNEGE / FAIRFAX MEDIA NZ) video of the Funeral 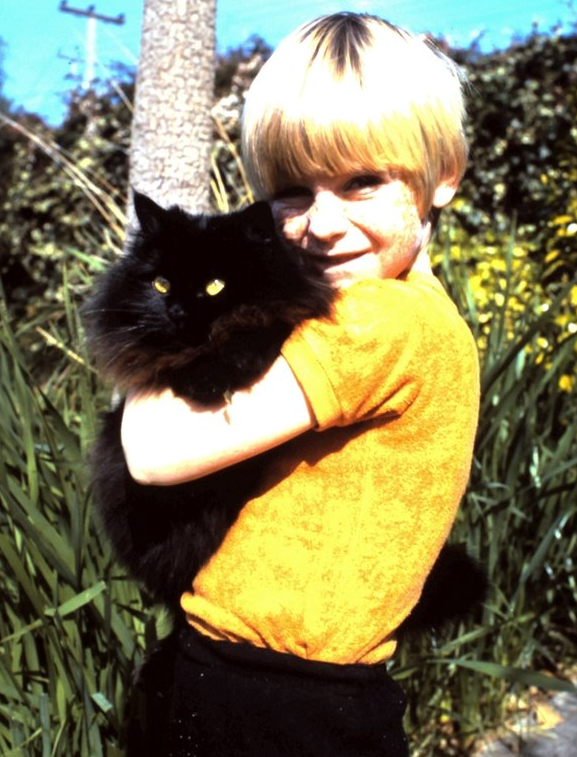 Today’s news reports of Cilla Black’s funeral and this random Windows desktop background selection (from thousands of possible images) seem worth a mention.

Although not really my generation I grew up more than aware of Cilla Black. My parents liked, and often played, her music and gave her name to our rather feisty half Persian family cat.

Cilla’s (the cat) mum was a pedigree Persian owned by our neighbours. Planned breeding with other pedigree mates mostly failed but she but was happy to hook up with passing strays.

The result was a number of pretty half Persian/half unknown, and it must be said often half bonkers, mongrel cats.

This news article about stray dogs in Arizona got my attention. You might doubt how stroppy a little Chihuahua can be?

Meet Alfie, pictured below latched onto his favourite toy, in defence mode. He’s a Chion, Chihuahua & Papillion mix, so can at least half rampage!

Chihuahuas are on the loose in an Arizona neighborhood and flooding animal control offices with reports of the roaming strays…. 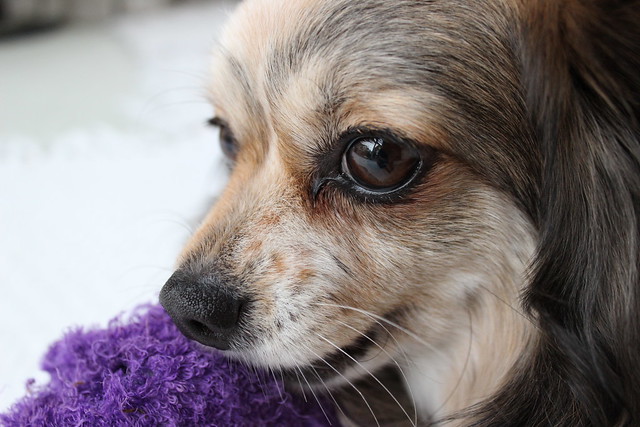 PS: I once heard an Emergency Dept. doctor on a podcast say that while big dogs get all the headlines bites from little ones can inflict just as much damage.

Mothers Day: got her new washing, drugs and gambling!

It was actually some new bed linen, collected her (prescription) pill pack and a Lotto ticket but that sounds less dramatic!

Also had a nice family lunch and (takeaway) roast dinner. A good day!

Although I didn’t attend a memorial service the day does not pass without remembering those who have served, one in particular.

My Mum never knew her Grandfather who died on the battlefield in the last few weeks of World War One (which ended 11th November – 1918). Although born in Australia, of German emigrants, he served for NZ where he had settled and married. He fought for King, Country and Empire against, possibly, his own distant relatives. The world is a strange place.

Commemorated in perpetuity by the Commonwealth War Graves Commission