When I saw TEDx Auckland 2014 announced I really wanted to go but was a bit torn. I loved the 2013 event but it meant a precious day of weekend gone. Weekends were crucial as I was trying to get fit for a rather demanding cycle tour in the Himalayas.

Ascending is about individuals and society rising to a higher level of consciousness.

Ascending is about finding the positives in any situation and building on them to make our lives, community, business and planet better.

As it turned out, the day spent at TEDx may have been the most valuable trip preparation I ever did thanks to Mike Allsop!

The gathering crowds, the Aotea Centre was a near sell-out! 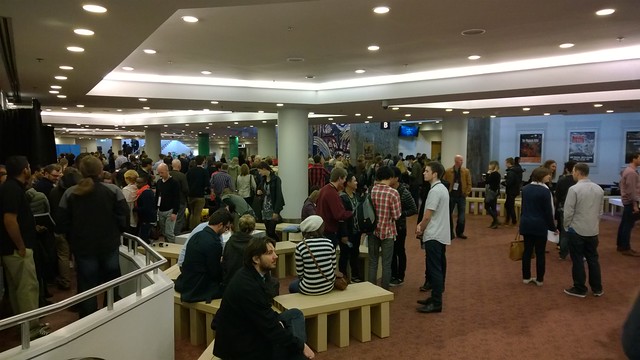 Waiting to Ascend, the stage is set: 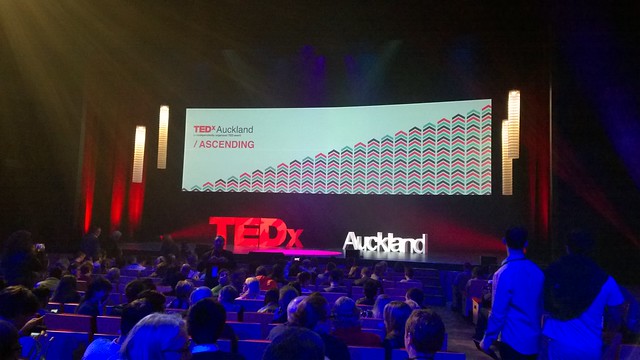 While buying my ticket to TEDx Auckland 2014 remembered I’d never gotten around to writing a post about the 2013 event.

Earlier this year there was some flack about TED, prompted it seems by some ‘dubious’ TEDx events. From my experience at TEDx Auckland it certainly wasn’t one of those. The Aotea Centre was full, the speakers uniformly excellent and it covered a wide variety of topics.

In his intro MC @VaughnDavis (below right) made a comment which summed up my TEDx experience. He said with TED on-line you tend to self censor, focus on the familiar, topics of interest. With the live event you can’t and it is a good thing. It was, as he suggested, the unexpected which made a real impression. 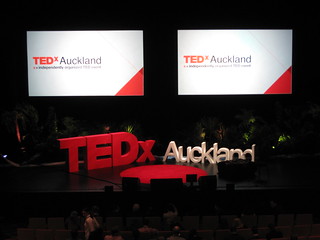 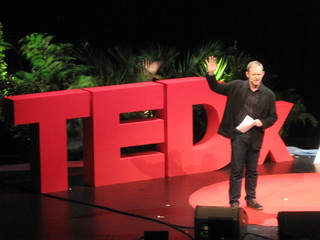 For example I’m not a fan of poetry but one memorable session was Grace Taylor’s Rising Voices (Youth poetry movement) and the powerful performances by Marina Alefosio & Brian Gashema. They’d never been on stage before and got a thoroughly deserved standing ovation from the full house Aotea Centre audience.

I had heard of Dr Richard Nunns but never seen him lecture. His style was awesome, building from a slow, seemingly rambling, start to an amazing mash up of traditional Maori instrumentals, a string quartet and hip-hop (with King Kapisi). Pity there isn’t a video of that session

Rather than trying to review all the sessions in detail, it was a while ago!, here are the notes I made on the day with a few [added comments]. I’ve added links to the actual presentation page, most of which have videos, if you want to see what inspired them.

The photos are all mine (my TEDx 2013 Album on Flickr). It was nice to be at an event which encouraged photography, tweeting and recording! 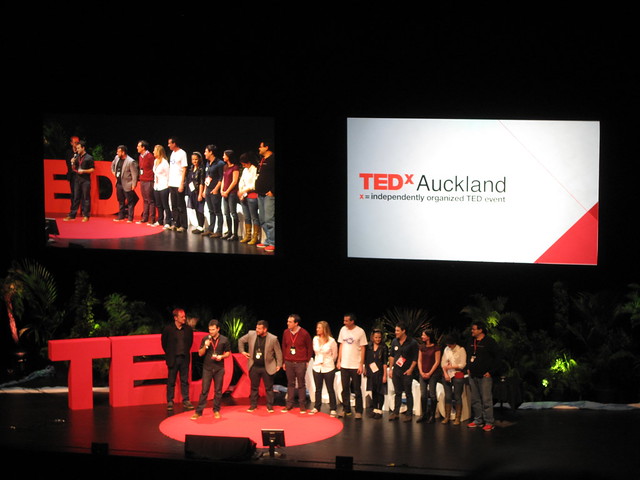 Between sessions the foyer included exhibits from some speakers and even live art. Lovenotes, handmade stationery from waste paper, were being made and sold on site. There was also a chance for some to experience Baby X but the queues were too long for me. 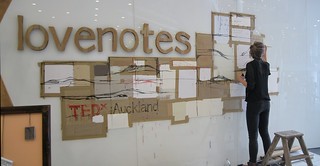 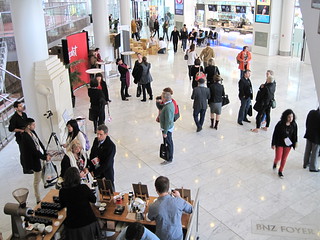 If I’d written this soon after TEDx Auckland 2013 I would have said keep an eye on the site for 2014 news. However, the tickets for 2014 are on sale at http://tedxauckland.com with one already sold to me! See you there?

I laughed when I saw this quote from the former Chrysler chief:

"I think Chrysler is where it is because of what we were able to do."

Seems it provoked another reaction from the author of this article in The Detroit News:

Bob Nardelli's 'reign of error' at Chrysler - The Detroit News

Still recovering from the Michigan State-Ohio State game and Matt Millen-color-commentary-induced nausea, I picked up The Detroit News on Monday to read the lead story with Bob Nardelli, which instantly provoked projectile vomiting…

The footnote states author “Jason Vines was vice president of communications at Chrysler under Bob Nardelli and his predecessor, Dieter Zetsche.”

Awesome collection of short videos. Some I’d seen, some were new but all worth your time

Truth is, the great value in most MBA and JD programs can be boiled down to 5 to 10 talks, presentations, classes and conversations that changed the way you experienced the world. So, I figured, why go through 2 years of B-school, drop $100,000 (that’s $70k on school, $20k on booze and $10k on Red Bull) and give up two years of income, when you can experience your…

Or maybe they have another way to achieve:

Sony Corporation doesn't want to produce any carbon emissions, use any virgin materials or produce any waste by 2050…

Not PC on leaky buildings

Peter Cresswell cuts through the bullshit that surrounds leaky homes in New Zealand:

How is Marchionne running Fiat-Chrysler?

How Marchionne Will Run Fiat-Chrysler - BusinessWeek

"a rumpled figure in slacks and a black polo shirt sporting a Chrysler logo, cut to the chase. "In this business," he said, "mediocrity will kill you. We can't accept it."

Can Tony Sergio Fix It?

Chrysler's fate is in the hands of the US Government and a brilliant Canadian who heads a, formerly itself ailing, Italian industrial giant. How bizarre is that!

I suspect Chrysler is beyond saving and this deal will, at best, result in a genuine US presence for Fiat Group. It's also an escape clause for Cerberus who probably only want the Finance arm, if anything.

Still, if anyone can, Sergio can!

In the past five years, Fiat’s Canada-raised CEO Sergio Marchionne achieved what no one could do in Detroit: He took a company on the verge of collapse and made it profitable. Perhaps even more unlikely, the former chartered accountant with an MBA and law degree is now Chrysler’s best hope for survival.

Why listen to a financial analyst, The Daily Show

It's apparent in spite of all the "science", the "analysis", they are just guessing, wrong

Via Life On the Wicked Stage: Act 2: Jon Stewart Sinks CNBC's Ship in a Cathartic Classic

Are Fonterra censoring their own site search to hide Sanlu?

The Sanlu melamine tainted milk powder tragedy has a very direct link to New Zealand. It's a company part-owned by New Zealand dairy giant Fonterra. The verdict today prompted me to look at their site for background on the Sanlu case and I found a strange anomaly. When you search for Sanlu (or San lu) on http://www.fonterra.com/ you get zero, no, nil results and a rather galling picture of a healthy young child in the side-bar; 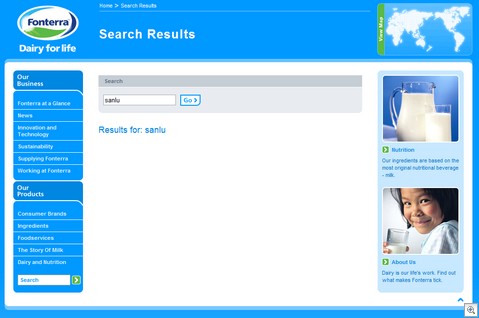 When you search their site with Google, there are over 150 results: 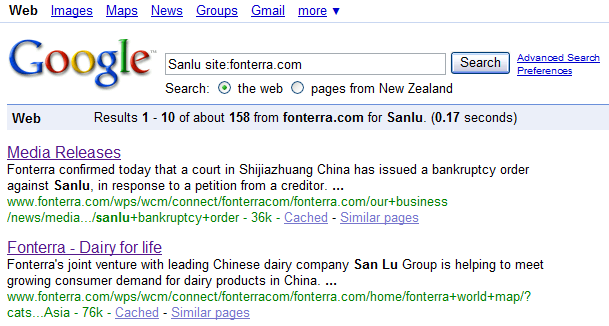 Are Fonterra filtering their own results to hide Sanlu related content? Do they not know about search engines?

Pressure on Fonterra as NZ reacts to Sanlu sentences | POLITICS