Farewell Spit (Onetahua): the north-western feature of the South Island that resembles a Kiwi beak... * * Especially if you rotate the map a bit away from North like this! This massive sandspit is on the Auckland-Christchurch domestic flightpath and the only sight I'd had of it to date. I took this photo flying South for a ride in 2005. This shows Tōtaranui Beach (left), Wainui Bay, Tākaka to Farewell Spit from a flight North in 2012. Remember thinking then about going back to explore it. I booked a tour with Farewell Spit Tours because: "You can freely enjoy Puponga... Read more →

I booked a guided trip departing from Collingwood tomorrow, but timing meant would have to drive for that. Collingwood is just 26km along the only road, cycling it would allow me to explore all the side roads and beaches along the way. No need for GPS, just follow this road. Tākaka River, might end up here for a swim if the tide is too low. An aircraft departing as I went past Tākaka Aerodrome reminded me how we arrived last time. Back in 2011 flew in from Karamea with a cycle tour but we didn't ride in Golden Bay. In... Read more →

Woke to another stunning day; clear blue sky and already 22 °C by the time I was ready to ride. The agenda was exploring around Tākaka, get to a beach for a swim, and take the gravel bike out to test the repaired rear hub. However, despite the late start, the desire to see 'just over the next hill' a couple of times led to riding ~76km. Other Strava legs today: Totaranui to Pōhara Beach Dinner TO2122-71b | Dinner to Home TO2122-71c Leaving Tākaka on a perfect day. Who's dat? Pōhara Beach I found the coast at Pōhara Beach, there... Read more → 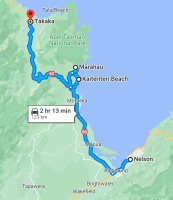 Today's mission was simple, drive to Tākaka, Golden Bay. It was a rest day, after several days riding, and would check out Kaiteriteri & Mārahau before heading 'over the hill'. I've been to both before, several times, but they're so nice was keen to go back. Thought about a ride at Kaiteriteri's MTB trails, not a huge 'park ride' fan but had heard good things about them. It is not far but Tākaka Hill's elevation (~1,000m) and twisty road takes time to drive, even without the scenery stops. I drove into Little Kaiteriteri, quieter than the main beach, and even... Read more → 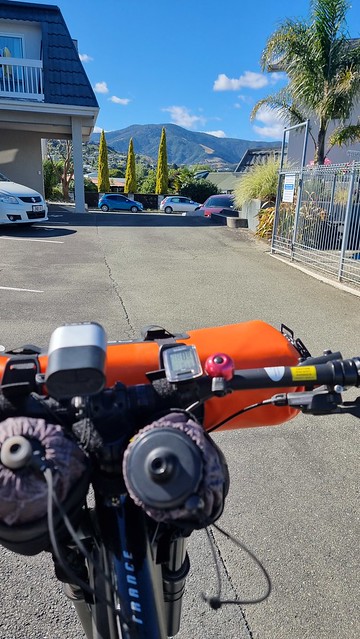 Although just a few kilometres from Nelson's city centre the Coppermine Trail is a true adventure ride high in the hills. I had been putting it off, holding out for the right weather and my last 'ride day' in Nelson proved to be it! Coppermine Trail The day began with the, now familiar, run into town. At about ten on a workday, Thursday, the cafés on the bike path were busy. It's easy to find the start of the Coppermine, just follow the bike path up Brook Stream to the hills at the end of Brook Street. Liked this odd... Read more → 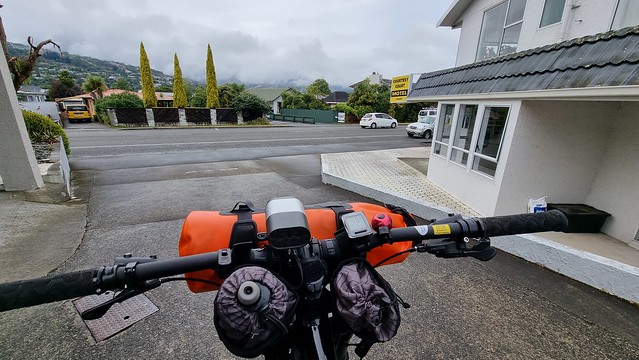 It was still cloudy up in the hills, so I hit the Great Taste Trail again. Rather than follow it explicitly I was heading through Richmond, then Pigeon Valley to the Motueka River Valley. I've ridden there a couple of times, so nice was looking forward to visiting again. Then it would be home via Mapua, Rabbit Island (another swim?) and back to the motel. Although mostly road riding, I was on my Mountain Bike (see yesterday) which would hardly be challenged by the gravel road and trail ahead. Heading towards Richmond, the white plume on the horizon is steam... Read more →

Woke to a wet and windy day. I needed to stock up with food (for breakfasts, ride snacks and dinners) and see if anyone could help with yesterday's discovery, the gravel bike's loose rear hub bearings. I called a few nearby bike shops; most were booked for days/weeks ahead but Village Cycles Richmond said they could take a look. Dropped the bike off but told them had another bike to ride, so to prioritise anything keeping other people from riding. I didn't really need it for the rest of my Nelson rides, could even do without it in Golden Bay.... Read more → 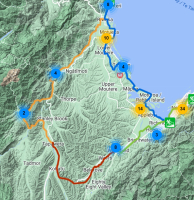 I faced a decision for my second Nelson ride, stay near sea level or head into the hills? While morning was nice the forecast for later in the day was a bit patchy and it was already looking cloudy up high. I decided to stay low and explore some of the coastal bike trail. Strava for return leg TO2122-67b; A straighter run back to Mapua meant 108km ride in total I set out for Motueka on Tasman's Great Taste Trail. It follows the coast from Nelson past Richmond and then across to Rabbit Island. From the Western end of Rabbit... Read more → 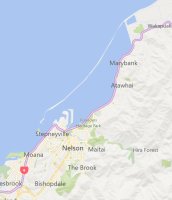 I've been to Nelson several times, cycled in the region quite a lot, but never cycled the city area. First ride in the South Island would be a cruise into town, from my Tahunanui Beach motel, and see where that led. Turned out, ~77km later, I would go quite far! It was a lovely day, fine and warm, but noon before I got on the road. As the day would be mostly road riding I took the gravel bike, rather than MTB. Followed the bike path to Tahunanui Beach, just to see where it went, before heading into the city.... Read more →

I awoke to a morning far calmer than last night's breeze led me to expect. A good sight when you are heading for Cook Strait and a ferry to the South Island. From Picton it would be a drive straight through to Nelson, base for my first South Island rides. I was on a 13:30 sailing, earliest available when I booked, so didn't have to rush straight to the dock. That meant time for breakfast at one of my favourite Wellington cafés. 'Seashore Cabaret' is just across the road from my Petone motel, their Buttermilk Pancakes and coffee were a... Read more →