Today’s ride was the first real chance to test my new Tailfin Pannier System. I had fitted it for the short “Get the car ride” last week but today loaded a single bag with the items I commute with (toolset, wet weather gear and ‘lunch’) for an 87km mixed ride B’s Tailfin recommendation A friend had supported the Tailfin Kickstarter and mentioned it at the time but I didn't think I needed it. She recently used it on a short tour and seeing that got me thinking about it again. I have a seat post beam rack pannier system I... Read more →

From no Abarth to an AHBART–My Abarth 500 Esseesse

It all started with an email. A running TradeMe search for “Fiat” turned up this listing which got me thinking about a way not to replace the Fiat Bravo HGT which is my daily drive. I should also credit, blame, Sam “Seen Through Glass” whose numerous Abarth YouTubes. many I (re)watched over Christmas/New Year, contributed to the Abarth being on my radar again. Love the Bravo, but time for a change? I’ve owned this 2001 car since 2008 and it has 252,000km on the clock. Although reasonably reliable minor mechanical problems can cost a lot to fix thanks to next... Read more → 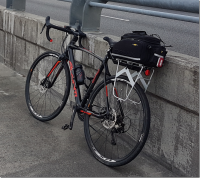 I went for a bike ride after work tonight to try out my “Happy Birthday to me” present which arrived the previous day. It’s an upgrade accessory for my CX/Commute bike, a gorgeous Tailfin Rack and Pannier. The ARC-3 doesn't have rack mounts and although I could, did , use my MTB seat post pannier it was a bit clunky and not really what the frame was designed for. The Tailfin is a light carbon ‘arch’ which mounts, with quick release clips, to an extended axle. A stabilising bar loops around the seat post and two waterproof pannier bags quick... Read more →

Cycle lane | Tick Green Light | Tick Forget MINI are made by BMW, thus don't have functioning indicators | Tick No harm done but could have been… Read more →

Tales off yachts lost and found

The news tonight of a solo sailors yacht turning up years after being abandoned reminded me of Chris Sayer. In 2002 he was forced to abandon his 6.5m racing yacht 480 kilometres west of Cape Reinga, NZ, after a collision with an unidentified object tore the keel out of the hull. Two to three years later, see the linked post, it was found in Papua New Guinea, approximately 2700 kilometres to the north. www.mysailing.com.au/news/on-a-remote-beach-in-png-they-never-expected-a-solo-racing-yacht Last I heard Chris was still sailing around the world, no longer solo, with his family. Text from the linked post in case it goes offline.... Read more →