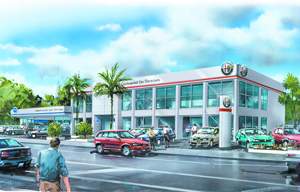 Continental Car Services (CCS) began life back in the 60's as “ Town Country Motors ” where mechanic Tim Bailey both fixed sold cars. They included Fiat and I remember going there as a kid with my Aun... Read more →

Traffic Light Thought - The slower they go, the faster they change?

Why does it seem to be: The slower someone goes down the motorway on-ramp, the faster they'll dive for the middle, "fast", lane once on the motorway? Inspired by someone today who did 40km/h... Read more →

Back from the blackout with a new look

It looks like the New Zealand Internet Blackout protest may have worked . While off-line I made some changes to the design, template and banners on all my blogs. As before the banner images will ch... Read more →

Why should I care about the Kiwis in Hopetoun, Western Austrailia?

I'm watching Sunday about Kiwis who chased the "big" money in Western Australia, which has evaporated, and thinking why should I care? They made the decision, they chased the big money in the Nicke... Read more →

Sitting at the lights I gaze at a relatively new, cheap looking, row of apartments. They are the kind you build by standing up a few tilt slabs and filling the gaps between with apartment. What cau... Read more →

My profile image, across the net, has gone black in support of this: Join New Zealand Internet blackout protest against insane copyright law Read more →

On Vox: QotD: Friday the 13th & Other Superstitions

Show us a superstition you believe in. » Read more on Vox Read more →

Prime TV (NZ) just advertised the next series of Top Gear. Its only months since it screened in the U.K. which must be a record! My Air New Zealand flight from S.F. had episodes one and two, which were great, but will be good to see them on a big screen. I was surprised Jeremy's "Lorry Driver Prostitute Killing" remarks were included in the airline edit! It was also interesting because one episode starts in S.F. so I recognized many of the locations as had biked there a few days before! Top Gear - Series 12 Prime TV (NZ). Sunday... Read more →

Leaving your job isn't as simple as you'd think! OK to tell boss to stick his job - New Zealand news on Stuff.co.nz. Telling the boss to "stick his job up his arse" is not always the same as a resignation, the Employment Relations Authority says... Read more →